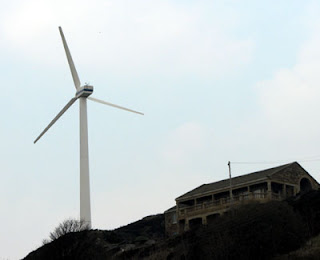 What makes one despair about our provincial government’s nuclear power strategy announced today - apart from the fact that it is years late – is the narrowness of vision and the utter cant of the naysayers.

Much is heard, for instance, of charges that the new generation of nuclear plants cannot be built without public subsidy, but virtually nothing is said of the fact that the much-vaunted wind power is taking a subsidy of £1 billion this year, under the so-called "Renewables Obligation" – a sum which is set to increase exponentially as these industrial windmills proliferate.

Another constantly raised issue is the cost of decommissioning nuclear plants at the end of their life but, interestingly, nothing is said about costs of getting rid of wind turbines once they have worn out or become obsolete.

That issue was in fact raised by MP Owen Paterson recently, who asked what the government’s estimate was for the cost of decommissioning a 2MW wind turbine, to include the cost of removing concrete foundations, access roads and associated infrastructures, and restoring sites to their original condition.

Interestingly, the answer confirmed that the government has indeed given no thought to the subject, the response from energy minister Malcolm Wicks being that, "no such estimate". Yet, if there is to be any parity in the debate, then these not insubstantial costs should be known. The suspicion is that the overall costs will be far greater than anything needed by the nuclear industry, as they eyesores (pictured) cannot be left standing.

That apart, the announcement has opened the gates to the marauding morons, not least Caroline Lucas MEP, the Green Party's principal speaker. Her great skill is to make even the LibDims look vaguely sensible, as she accused Gordon Brown of "the most staggering failure of political vision." 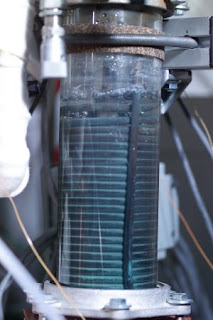 The reason, she says, that Germany has 300 times as much solar power and ten times as much wind power than the UK is simply because German politicians, led by the Greens, have had the political will to lead the way.

Germany is, of course, is the country which has closed down its nuclear industry, making it critically dependent for its energy supplies on Russia, putting in hoc to an unstable and increasingly oppressive regime. And this, Mz Lucas, believes, is a suitable role model for the UK?

But when it comes to the "vision thing", so much of the thinking is confined to the provision of electricity, with nuclear only accounting for some 20 percent of our total production.

Few people, it seems, are thinking about the wider applications of nuclear power, and in particular, the revolutionary technology in developing high temperature electrolysis, turning water into hydrogen (test rig illustrated above). This can be used to power vehicles, with BMW already producing a production model. 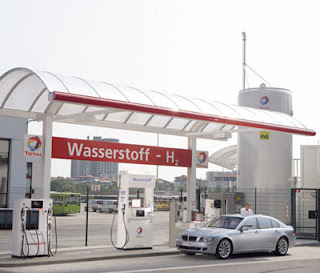 In conventional terms, nuclear power is considered appropriate for generating the "base load", with the peak load being supplied by more flexible and responsible generation equipment. But one alternative could be to provide peak load through nuclear, shedding capacity when needed by switching to hydrogen production in off-peak hours.

The real problem with this, however, is not the technology. For the Greens, widespread use of hydrogen to power vehicles is their ultimate nightmare. With no emissions other than water vapour, these vehicles would completely undermine their attempts to restrict the use of private transport, increasingly justified on the grounds that this is necessary to combat "climate change".

It is perhaps significant, therefore, that the major work on high-temperature hydrolysis is being undertaken at the Idaho National Engineering and Environmental Laboratory, funded by the US government. This, clearly, is another reason why it should be opposed. One cannot possibly have the "great Satan" leading the way with clean technology.