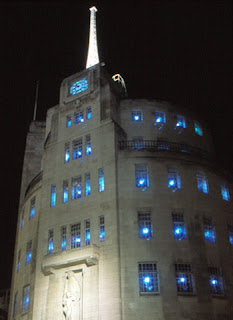 In the online edition of The Sunday Times yesterday (and also picked up by Englishmans Castle), but not in the print edition (or, at least, the bit I looked at) is a story headed, "Fears of bias as BBC gets £141m in EU loans".

With the pomposity for which his breed is known, Jonathan Oliver, political editor writes that, "The BBC last night faced accusations of pro-Brussels bias as it was revealed that the corporation had taken out £141m in "soft" loans from the European Union."

We then get to learn that, "The broadcaster has taken out three separate low interest loans from the EU-backed European Investment Bank (EIB) to fund the expansion of its growing commercial empire. It also emerged that the BBC has received grants from the EU worth £1.4m over the past five years."

One has to smile at the phrasing: "It also emerged …", confirming the MSM belief that nothing is "news" until they have written about it. Going back through the archives of this boring, trivial little blog, however, we find that we wrote about this on 24 June 2004 and again on 11 July 2006.

The first piece was in response to a question from Lord Stoddart of Swindon, which established a remarkable number of loans and payments, while we established that BBC Worldwide Limited had opened up a loan facility of £25 million from the European Investment Bank, "to finance the expansion of BBCW's investments in BBC's new productions over the period 2002-2004".

We also established from the BBC's own annual accounts that the EIB had made two loan facilities available to "BBC Commercial Holdings". The first, was for an amount of £66 million, available for drawing until March 2005 and had either be repaid in full as a single repayment by March 2013 or on an amortising basis by March 2015. The second, which was the one for £25 million, then available for drawing until November 2003 and repayable in one single instalment by November 2007.

Also noted by us at the time was that the task of the European Investment Bank - which is the European Union's financing institution – was, and still is” to contribute towards the integration, balanced development and economic and social cohesion of the Member Countries.”

To be fair to the MSM, the second reference was picked up by The Guardian. We then saw similar wording: "It has also emerged …", this time the fact that the BBC had applied at the beginning of June (2006) for a further loan of up to £75m to cover investment in "new content productions" and the "development of related spinoffs" for its commercial subsidiary, BBC Worldwide.

The piece also noted that the EIB is the EU's "long-term financing institution" and describes its aim as providing "finance capital investment" to further "European integration by promoting EU policies".

Then cited was Philip Davies, the Conservative MP for Shipley, speaking at the culture, media and sport select committee hearing on the BBC annual report. He asked how the corporation could remain impartial on the sensitive political subject of Europe if it took EU money. "How does the BBC claim to report on matters of the EU objectively when it has received loans from this particular institution?," he said.

Late on the case but better late than never, The Sunday Times declares that the Brussels deals raise awkward questions for the corporation about its coverage of European affairs and its burgeoning profit-making arm whose interests extend to property, publishing and the internet.

We are told that the details of the loans and grants stretching back six years emerged in a letter written by Zarin Patel, the BBC's finance director, to Bob Spink, a Conservative MP.

The first £66m loan in 2003 was used to fund "the fit-out" of a new building in the BBC's Media Village development in west London, which was later sold for a profit. The second loan for £25m and the third for £50m were made to BBC Worldwide, the corporation's profit-making arm, to pay for the acquisition of overseas rights to programmes made by the BBC in the UK.

Again, also we get: The EIB has described itself as "an autonomous body set up to finance capital investment furthering European integration by promoting EU policies".

Bob Spink then says he would be putting down a Commons motion condemning the BBC for accepting the cash: "I am concerned that the independence and objectivity of the BBC may have been improperly influenced by funding from the EU," he says.

Needless to say, the BBC denies that it is in any way influenced by the huge amount of cash coming its way, which is about as plausible as those who say Gordon Brown is a Eurosceptic.

Well done, anyway, the Sunday Times and Bob Spink for raising the matter again. But the funny thing is that the EIB itself makes absolutely no secret of this scam. When, in 2002 it first doshed out some money to the BBC, it actually issued a press release. Then EIB Vice-President Peter Sedgwick was cited as saying:

Public service broadcasting like that of the BBC, plays an important role in providing high-quality programme production. The project will sustain the international competitiveness of European audiovisual production and will also enhance demand for independent producers as they will be largely in charge of programme production.

That all goes to show that the best way of keeping a secret is to issue a press release – allowing a self-important journalist nearly six years later to report: "It has emerged …".