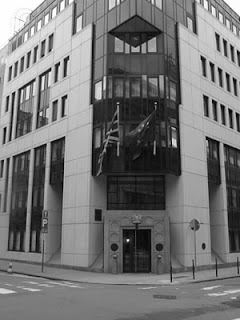 The Foreign Office is to cut the number of diplomats working in Europe by a third so they can be redeployed to combat radicalism in the Middle East and Asia.

This we were told yesterday by The Sunday Times, with the child Miliband taking out civil servants based in European capitals such as Paris, Rome and Berlin. They are to be retrained in language skills to reinforce diplomatic posts in Kabul, Baghdad and Islamabad.

Furthermore, an extra £79m is to be spent over three years on combating Muslim radicalisation, with dozens of extra political officers deployed to build contacts with local people in the Middle East and Pakistan.

Says Miliband, "We will put more resources into countering terrorism and nuclear proliferation … We will increase the number of diplomats working in the Middle East and south Asia by 32 percent. That means we can deepen our engagement with Pakistan to prevent the growth of extremism there …".

Interestingly, no mention is made of the embassy in Brussels (pictured) – which deals mainly with EU institutions - so the indications are that it is just representation in the major member state countries that is being affected.

There is some logic here, in that a local authorities, for instance, do not have "embassies" in other local authority areas in the same country. Similarly, as a vassal state of the European Union, it seems hardly necessary for the UK to have embassies in other vassal states, when the supreme government increasingly defines the relationships, and the state governments meet in Brussels so often.

Cutting back therefore, seems simply to be recognising the reality of our new status, especially when Miliband says he also wants to strengthen the effectiveness of institutions such as the United Nations and the European Union.

So, Miliband wants to strengthen the effectiveness of our supreme government. Nice of him to say so.