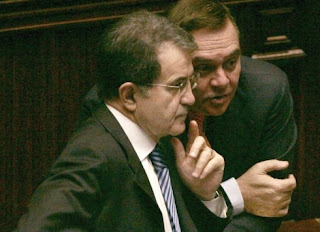 Once again, thanks to our readers who supply us with material when we nod off with boredom. In this case we nearly missed a delightful tale from the land of all tales, Italy.

As Il Giornale puts it, “La bomba arriva alle 18,30 del Lunedì”. I guess my Italian runs to that. The “bomba”, as the Financial Times helpfully explains, is the withdrawal of a small Catholic party, Udeur, from the coalition, leaving it without a majority in the Senate.

In his statement the leader of the party, Clemente Mastella, until recently the Justice Minister, made no bones about it:

“This majority, the life of this centre-left is finished. It is over. I am not discussing it,” Mr Mastella told a news conference.

It should be interesting to see what will happen tomorrow “when the upper house considers a vote of no confidence in Pecoraro Scanio, the environment minister, over the rubbish crisis in Naples”.

What is it that made Clemente Mastella withdraw from the government in such a huff.? He resigned a week ago because he “was reported to be under investigation for corruption following the arrest of his wife”. So sensitive, these people. What’s an investigation or two between friends?

Clearly, Romano Prodi thought it was not important as he tried to refuse Signor Mastella’s resignation but failed to do so. Now the entire party has gone and quite possibly there will be no Italian government this time next week.

The FT is sanguine, pointing out that the president does not want another election under the present electoral system but the various small parties that are still in the coalition have a vested interest in the system remaining precisely as it is. So, Prodi might hang on in there with the help of the littlies.

An even more interesting question is what is to happen with the Constitutional Reform Lisbon Treaty if the government collapses.
Posted by Helen at 16:30