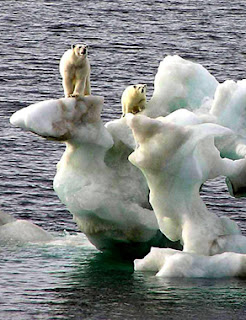 There are few more iconic images, illustrating the (supposed) effects of global warming than the photograph of an adult polar bear with its cub, apparently stranded on melting ice, miles away from the shore line.

It has been used by, amongst others, snake oil salesman Al Gore and, of course, found its way into the media, not least The Daily Mail which milked it for all the emotive appeal that it could possibly extract from it.

Now, from an online piece written by Carole J Williams, we get a superb dissertation on how the photographs came to be taken, how they were stolen from the original photographer and then came into the hands of Al Gore, who used them totally out of context to make a point which was not in any way supported by the material he was using.

The piece is called "How environmental extremists manipulate the masses" – which, of course, they do with a little help from their friends in the media. It is well worth a read.

The photographs themselves – or their use - are a classic example of framing, about which we wrote last year, and demonstrate how it is the context imposed on material rather than the material itself that conveys the message.