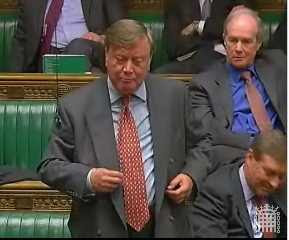 After the delay occasioned by the statements to the House, the Commons is now debating the second reading of the European Union (Amendment) Bill. We are "entertained" by Kenneth Clarke telling us to stop this "theological nonsense" about the Lisbon Treaty being the same as the EU Constitution.

According to Millibland, it's the "opt-outs" wot make it different. The "myth" that we are threatened by a European "superstate" has faded, he says. The consequence of Conservative policy is to prolong the institutional debate that we wish to end. John Major used words about these people "that I cannot use in this House". He adds, "The real divide is between those who believe that Europe is good for Britain and Britain is good for Europe, and those who do not." We are better off in says the boy.