A one party state 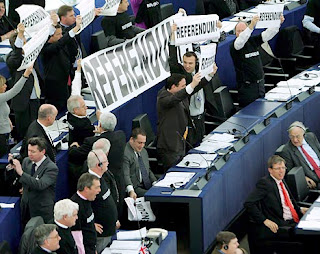 Daniel Hannan writes a good piece for The Daily Telegraph today, commenting on the shenanigans going on in the EU parliament – ignored entirely by the rest of the media.

The headline to his piece for once reflects the content (not always the case), stating baldly: "EU treaty censored by Euro-federalists" with Hannan opening in rhetorical vein. "Shall I tell you the most annoying thing about Eurocrats?" he asks, then telling us that, "It's not their readiness to toss aside inconvenient referendum results, nor their intolerance of dissent. No, the truly maddening thing about them is the flagrancy with which they break their own rules."

The story he unfolds is of this week in the Strasbourg parliament, where a small group of MEPs – including the UKIP team although he does not say this - decided to protest against the ratification of the Lisbon treaty, without the promised referendums.

There being few openings available to them (the last more open protest having been suppressed) they decided on procedural delay - the technique that worked so brilliantly for the Irish nationalist leader Charles Stewart Parnell.

Like Parnell, writes Hannan, we are resisting a settlement that is legal, in that the Lisbon Treaty has been signed by 27 elected leaders, but that is not legitimate, in that most of our constituents would vote against it if the commitment to a referendum were honoured. Accordingly, he adds, we decided that our opposition should be peaceable, decorous and within the letter of the law.

Says Hannan, MEPs have two absolute rights in the parliament, the right to demand that a vote be held electronically rather than by (a faster) show of hands, and, when the vote is over, a right to state, in not more than a minute, why we voted as we did.

The MEPs decided to use these rights, legitimately to delay proceedings in order to make their point, effectively "working to rule", the main effects of which would have been to have kept MEPs from their lunch for half an hour, and perhaps delayed the afternoon session.

This then brings us to the crunch. Even this mild protest was too much for the "colleagues". With brazen disregard for their own rulebook, they ignored the dissenting MEPs' rights, the deputy president in the chair (Hannan calls him the "speaker") suspending the session in order that the "colleagues" could go to lunch on time.

Hannan quite adds that this action had no legal basis and he is absolutely right. But, in a classic display of high-handed intolerance, MEP Richard Corbett dismisses this perfectly legitimate attempt to make a point (the very essence of parliamentary democracy) as "procedural jiggery-pokery", then declaiming the MEPs for "the sheer contempt they show to democracy", which he says is "breathtaking".

Corbett, however, is not an ordinary MEP. As a "guru" of EU parliamentary procedure, he is author of the seminal textbook on the rules of the EU parliament. Breathtaking it is, but what catches the breath is that he should take such a cavalier view of his own rules.

England Expects explains more of the background and there is much more to the Hannan's piece, which deserves a read. The fact is, though, that the "colleagues" may have gone for the trappings of democracy, with their votes and their "parliament" but they will not brook dissent. We are now living in a one party state - dark times indeed.