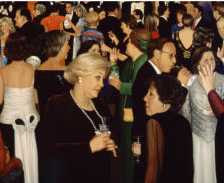 One really ought to get worked up about the government's attempts to guillotine the debate on the European Union (Amendment) Bill, as indeed does The Daily Telegraph with an admirably well-informed report.

This is backed up by a trenchant leader, complaining that Brown, having promised "the fullest possible parliamentary debate" is now reneging on that promise and seeking to close down the debate.

In strict terms, though – if the guillotine goes through – this will not be the government's doing. MPs are "sovereign" in their own House and it is they, not the ministers, who decide on the business in the House. As the Telegraph so aptly says, "On Monday, the Commons must defeat this proposed guillotine and restore some democratic credibility to its proceedings, or the game really will be up".

The trouble is, though, the game is already up. The debate is a charade. Although MPs are going through the treaty, line by line, with some trying to re-live the glory days of Maastricht by submitting hundreds of amendments, not one word, not a comma, not a full stop can be changed. The whole process is as sterile as a mule, the MPs going through the motions with absolutely no prospect of achieving anything.

Of course, there are "noises off" who urge that we should be doing something, anything – no matter how costly or ineffective – to bring this issue to the attention of the public. But the brutal fact is that this battle is lost, as both myself and my co-editor have pointed out.

The difference between the "do something" brigade and us, I suppose, is that when the dust has settled over the constitutional Lisbon treaty, many of them will go back to what they were doing before. Others will move on to fresher fields, and some of them rewarded with safe seats in the Conservative Party, in recognition of their sterling services to not rocking the boat "the cause". We, however, will still be there, as we were when some of the more high-profile "campaigners" were still in nappies.

We are by no means alone in recognising that this is a long war and that the next step is to plan our strategy for the next phase, and the next, until we eventually achieve the victory we all so much need. Some of that was embodied in my co-editor's recent post which offers some home truths that so many Eurosceptics would like to avoid.

Nevertheless, we cannot allow the current treaty to go forward without some protest and some noise, but the reality is that this is a minority pursuit. There simply is not the public outrage out there which will sustain a popular movement. And, as the economic clouds gather, ordinary people have more pressing concerns than what they see as the abstract issue of the encroaching powers of the European Union.

The task is then to bring home to people the effect of our membership, the dire impact the EU has on our wellbeing and liberty. But even then they will take some convincing as long as so many of our prattling classes insist on viewing politics through the narrow prism of the national perspective, unable to come to terms with the fact that Westminster has no more significance than their local council, and that real power has drained away.

An example of this comes in the Telegraph today, trailing a book written by Robert Peston, the BBC's business editor. Under the heading, "Who runs Britain?" the article asks, "Do big businesses and the super-rich, in fact, control our lives? Who or what else has a major influence on the way Britain is governed?"

Not a few of the commentariat point out the obvious, the very thing that little Peston cannot cope with – the European Union. And it is not until the likes of Peston and his claque of fellow prattlers are forced, kicking and screaming, to recognise the reality that they so assiduously ignore that we will begin to make progress.

Therein lies the battle, forcing these people to recognise that which they are too timorous to admit, dragging them out of their comfort zones into the cold light of day where their self-important prattling is seen for what it is – the mouthings of the weak and inadequate who simply cannot cope with the real world.

You can buy a print of the pic here.