He who turns and runs away … 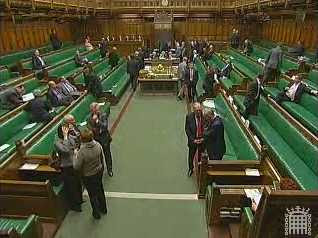 … lives to fight another day, as the saying goes. Although this blog has been condemned in some quarters for its negativity, we would prefer to call it realism. The AFP news agency headlines its report, "Government wins first round in battle over EU treaty," and indeed it did, with 362 votes to 224, a very safe majority of 148 as the Lib-dims pitched in to support their beloved European Union.

The amendment for a referendum was not even heard, the great Labour rebellion never materialised and the debate was truncated to less than five hours with back-benchers allowed to speak for a mere eight minutes. There were some good speeches but nothing we have not heard before and Labour was not for turning.

We now have five weeks of committee, on the floor of the House, where we expect a referendum amendment, which will be defeated as decisively as the motion for the second reading was agreed. After the report stage and the third reading, it will go to the House of Lords, where there will be some ritual fireworks but the arithmetic does not favour a victory.

The great Peter Riddell, a legend in his own lunchtime, offers his wisdom in The Times, its headline reading, "Trouble ahead, but this is no Maastricht". We do not always agree with this man (in fact, we rarely agree with this man), but he dissects the arithmetic and takes soundings of the political mood.

In truth, the Conservatives find this ratification process as much an embarrassment as Labour, so both main parties will be glad to see the back of it. Their need, as we have always maintained, is to fight the good fight – and to be seen to do so – without appearing "too obsessive and Europhobic", as Riddell puts it – and then move on. The Lisbon Bill looks unlikely to be another Maastricht, Riddell concludes and he is, unfortunately right.

But to lose the battle, as we said in our previous post, is not to lose the war. We were always in this for the long haul and we will not be the only ones to have said that the EU carries within it the seeds of its own destruction. Quite when it will collapse is anyone's guess, but collapse it will.

It was always the case, however, that the Eurosceptics could never actually win the war, but simply hasten its end, and – looking optimistically at the situation, the greater the power the acquires, the higher its visibility and the more opportunities it has to foul up. The fishing industry is one thing, but when it screws up the entire energy market, people will really begin to notice.

And, in "winning" this battle for its constitution - which it will - it will leave a legacy of bitterness and distrust in the political process. No matter how much it payrolls its supporters, it cannot buy all of us. Its "victory", therefore, will be of the Pyrrhic variety.

In that sense, perhaps, this vote yesterday evening (the picture shows MPs during the vote), to paraphrase a certain prime minister, was not the beginning of the end, but it may well have been the end of the beginning, the start of the downfall of the European Union.