"A local authority in a new supranational body" 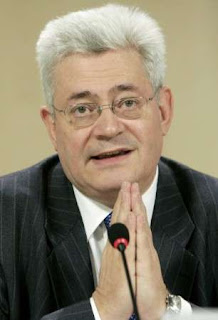 Ripples spread from the EU parliament protest in December, when things got slightly out of hand as MEPs sought to display referendum banners in the chamber.

The guilty ones, including Austrian Andreas Moelzer, Britain's Roger Helmer and Jim Allister, are being summonsed before parliament president Hans-Gert Pöttering, for "personal meetings" ... before he takes a "reasoned decision" on the matter, this being a precursor to docking the MEPs' daily allowances.

Another of those MEPs is the Frenchman Bruno Gollnisch who was in the now-disbanded Independence, Tradition and Sovereignty group. According to
Javno, not only is he entirely unrepentant about his action but has agreed to speak in Ireland in May ahead of its referendum on the new EU treaty.

What is particularly interesting though is his message. Gollnisch says he is going to tell the Irish that, "They are going to make you a local authority in a new supranational body …".

That, of course, is nothing more or less than the truth, but it is refreshing to find a Frenchman pushing this line. He is one of the very few prepared to do so and his intervention points up the complete inability of our own political classes, and their media groupies, to recognise this truth.

This is further reinforced by a response to our piece on Tuesday when we accused The Telegraph's political correspondent of living in a parallel universe.

This was James Kirkup, who allowed a Tory comment in his own piece on the "record rate" of food prices increase, attributing the inflation to the Gordon Brown's mismanagement of the economy.

Our piece, which took him to task, pointing out the EU involvement (which he failed to mention), was passed to the said Mr Kirkup. In a somewhat tart e-mail, he retorted that, "The suggestion that rising global food prices can be solely attributed to the EU … strikes me as rather over-done".

From this, it seems that Mr Kirkup is not only unable to see the elephant in the room. He cannot read either. Our piece states specifically, "While the EU cannot be held entirely responsible for the global rise in food commodities its mismanagement of stocks and its tardy response to the price hikes have contributed significantly to the problem."

But, this is all a symptom of the problem which Gollnisch highlights. Kirkup, like so many of his ilk, simply cannot cope with the idea that the Westminster which he so assiduously covers is merely part of "a local authority in a new supranational body".