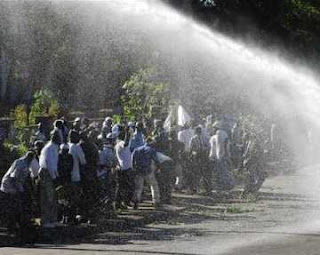 Even with the best will in the world, it would be difficult to send in foreign troops to Kenya, to help the authorities to quell the violence. But as John O'Shea - the chief executive of the Irish aid agency Goal – prepares to evacuate all staff from the Kenyan capital city due to the worsening security crisis, he is calling for direct EU intervention.

Considering how long it has taken the EU not to put troops into Chad, however, John O'Shea is being a tad optimistic if he believes that the EU could put a force in this side of Easter – next year.

But an indication of how difficult that would be politically comes from the Irish foreign affairs minister Dermot Ahern, who has dismissed O'Shea's calls outright. He points out that any Irish army involvement as part of an EU peace-enforcement group would require "triple-lock approval" of the Oireachtas (the president of Ireland and the two houses of parliament), the Government and the UN.

Meanwhile, the EU's putative foreign minister, Javier Solana, is going to the source of real power, the United States, suggesting a joint mission to Kenya "to assess the unrest" after the disputed re-election of President Mwai Kibaki. But, such is Solana's grip on reality that he is not able to define the exact "mandate" of any mission. It seems he has in mind a joint envoy or team of envoys, to carry out a fact-finding mission.

Whatever else, possibly the last thing on this earth the Kenyan authorities need at this time is a group of self-important "envoys", with all the security complications that that implies. But, short of a rapid reaction force with real teeth, there is not a great deal more the EU can do. Once again, the limits of power are only too apparent.