"I know me place" 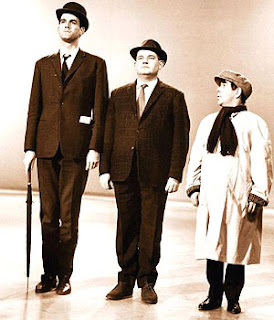 A little bit of nostalgia for those who remember those brilliant sketches of the representatives of the three classes back in the late sixties.

Much has changed since then. The new ruling class are the officials and those of us who skivvy in the background are treated accordingly. We must know our places.

Why did I think of this? Well, sharp-eyed readers of my posting on Memorial Days will have noticed a correction.

In the best traditions of Emanuel Strobes, p.p. Lord Gnome I have to issue a correction. I have never intended to imply by word or deed that Assembly Member Len Duvall, pictured below, leader of the Labour Group in the Assembly who bears an uncanny resemblance to the young Leonid Breshnev, is a bully. He is nothing of the sort and, I hope, everyone in the Great Glass Egg will take note of this. The only reason that I may have thought this, quite erroneously, and I have now seen the error of my ways, is because of an e-mail correspondence we had after I suggested that the GLA might like to have a memorial for victims of Communism as well as one for victims of the Holocaust.

In response he called me a Holocaust denier and when I tried to explain what I meant he snarled:

I think you know what their position is and do not patronise an elected Member (regardless of party) if you are a member of staff.

(The "their" applies to the BNP, whose views, he alleged, were similar to UKIP's.)

I am sure our readers will agree that this does not constitute bullying. After all, I know my place.
Posted by Helen at 17:49