What motivates these people? 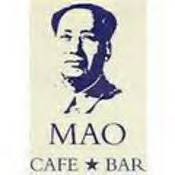 Thanks to Samizdata I find a link to a cafe in Dublin, which sounds rather horrible and out of date. I mean "happening places" are soooo sixties. Haven't seen them anywhere for decades, though I must admit I appreciate that managers might want to keep the use of toilets to their customers.

No, this is not developing into a restaurant critique. If Dubliners want to go to a "happening" cafe, let them. The point is that the place is called Cafe Mao and sports the head of possibly the biggest mass murderer of the twentieth century, which can boast one or two of them, Mao Tse-tung.

As the chap on Samizdata says:

Kill six millions Jews in Germany, your name becomes a synonym with evil. Kill between 44 and 72 million Chinese, you get a cafe named after you. It's a funny old world, eh?

Well, yes. Not that funny really.

The point is not really who the victims are though one does get a definite feeling from the right-on crowd that Russian, Ukrainians, Chinese and Cambodians (to name but a few) do not really matter all that much. As it happens, Stalin killed a very large number of Jews, not just because that was inevitable with the repeated waves of oppression but because his second large purge of the late forties and early fifties was largely anti-Semitic.

It is described in the excellent but harrowing "Stalin's Secret Pogrom" by Joshua Rubenstein and Vladimir Naumov, which argues on very good evidence, that had Stalin's plans been carried out, European Jewry would have not survived this second massive blow.

Still, we hear little about this or about those Russians, Ukrainians, Chinese, Cambodians etc. The secret is not the victims but the murderers. As long as they pronounce left-wing tosh they are deemed to "mean well"; as long as they can show themselves to be pathological victims they are embraced by the international left-wing, who has completely abandoned all pretence of caring about its traditional causes.

The recent hoo-ha about Ms Magazine (what waves of nostalgia that name induces) refusing to print an advertisement from the American Jewish Congress that showed pictures of three Israeli women, President of the Supreme Court Dorit Beinish, Vice Prime Minister and Minister for Foreign Affairs Tzipi Livni and Knesset Speaker Dalia Itzik, proved that beyond any doubt and not for the first time.

I think I'll go and beat my head against the wall for a bit.
Posted by Helen at 16:23