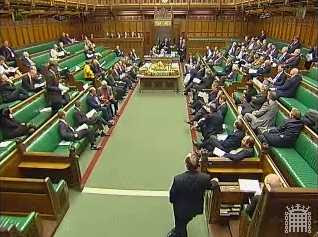 Yesterday, the House of Commons debated the motion to curtail debate on the Lisbon Treaty ratification. The vote went with the government, the Ayes 299, and the Noes 243. The guilty men and women are here.

Amongst the notable contributions was Sir Nicholas Winterton, who declared:

Bob Spink, in a procedural motion prior to the main debate, also made some important points. He told the House:

This motion seeks to limit debate to 10 o’clock tonight, which in view of its importance is quite improper. The whole country is interested in our constitutional relationship with the European Union. We are debating the timetable for that debate, so it is important that we do not curtail the debate in any way.

Last night, BBC Radio 4's "Westminster Hour" at 10 pm covered the House's upcoming business, yet at no time was the EU debate mentioned. That shows, of course, the lack of publicity given by the BBC, because of its bias and probably as a result of the EU’s funding of the BBC. The soft loans and other funding amounts to some €256 million over the past five years alone.

That shows the importance of our having an unlimited debate in this House, so that people in this country can understand the importance of the question. I am certainly against the motion and I urge the House to vote against it so that Members can debate the matter for as long as it takes and we can get publicity and understanding in the country on its importance.

The point about the BBC is well made. Our state broadcaster is never going to bite the hand that feeds it.

In The Daily Telegraph letters, today, Lord Naseby comments that:

By tradition, all constitutional Bills are taken on the floor of the House of Commons and are never guillotined.

When, as Michael Morris, I was chairman of Ways and Means at the time of the Maastricht Bill, I took the chair and decided each day what amendments were in order, what topics would be debated and how long it was necessary to debate a topic before allowing a vote.

I was not popular with the Government or the Opposition, but every MP had a chance to exhaustively explore the implications of the Bill. Railroading such a vital bill as the European treaty is not democracy: it is virtual dictatorship.

He is not wrong, apart from splitting his infinitive. We are not living in a democracy any more.