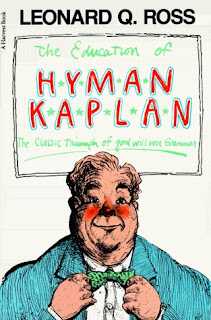 One of the funniest and most moving works in American literature is “The Education of H*Y*M*A*N K*A*P*L*A*N” by Leo Rosten (real name Leonard Q. Ross). For those readers who are unacquainted with this delightful personality, Hyman Kaplan is “a plump, red-faced gentleman in his forties, with wavy blond hair, two fountain pens in his outer pocket, and a perpetual smile”. By day he is a cutter in a dress factory (or Cotter In Dress Faktory) in New York. In the evenings he attends the beginners’ grade of the American Night Preparatory School for Adults (‘English – Americanization – Civics – Preparation for Naturalization).

Mr Kaplan, who always writes his name in multicoloured capitals with asterisks between the letters, is something of a problem for the tutor. This is not because he does not want to learn. On the contrary, Mr Kaplan and the rest of the class are very eager to learn to speak, read and write English correctly and be as American as they possibly can be as soon as it is possible. To this end they spend their precious free time at the Night Preparatory School and doing homework. It’s just that Mr Kaplan gets things wrong with the best possible will in the world and with the greatest desire to learn as well as “dip thinking”.

It is not really possible to quote with advantage from the book – like all great comic masterpieces the whole is far better than the sum of its parts. I do, however, feel that Mr John Denham might benefit from reading this great work of literature.

Who, you might ask, is John Denham. He is a far less interesting personage than Hyman Kaplan. He is, in fact, the Skills Secretary. Ha! I bet you didn’t even know we had a Skills Secretary in Britain. Well, I didn’t until this individual swam into my ken. I wonder which came first the Skills Secretary or the endemic shortage of skills in the country.

The reason Mr Denham has been gracing various media outlets is that there has been another plan to deal with the problem of long-term British residents (make that several generations in some cases) who cannot speak English.

Mr Denham thinks this is terrible (and one must agree with him that it is not good but for different reasons from the ones he advances):

There are still too many long-term residents committed to making a contribution to Britain who cannot engage with other people in their neighbourhoods - let alone play an active role in their communities - simply because their lack of English prevents it.This is having a negative impact on their life chances and limiting their ability to integrate. It is this group we wish to prioritise.

Had Mr Denham attended that Night Preparatory School for Adults, he might have realized that he was using the wrong aspect viz. passive rather than active. The way he puts it makes one think that there is some kind of a blight on people who are desperate to be part of British society and make a contribution to Britain but cannot do so because they do not speak the language.

Learning or not learning a language is a matter of choice and many people (including many tens of thousands of British ex-pats abroad) choose not to do so. This is not something that is inflicted on them and one cannot help feeling that anyone who really is committed to contributing to the country will start by learning the language.

This is not a particularly new problem. There have always been immigrants – more to the United States but plenty to Britain – and many of them, particularly of the older generation, never managed to learn the language of the new country. The assumption has always been that the younger generations will learn and will help out those who cannot do so. Hence those night schools that Leo Rosten writes about so amusingly.

The problem, as ever, is money. In the first place, many millions of pounds are spent on public sector information being produced in many different languages. This, naturally enough, lifts the necessity to learn English. Why bother if everything is provided in your language with an interpreter if you really want it?

When I did jury service, interpreters were being provided for the accused because they allegedly spoke only Jamaican patois, whatever that may be.

Last year, it was decided to cap spending on ESOL:

The government capped spending on Esol (English for speakers of other languages) last summer after it trebled over the previous five years to £300m a year, amid protests from teaching unions, colleges and other teaching organisations.

One must admit that there is some difficulty there. If the spending has been shooting up like that why are there still so many long-term residents in this country who cannot fulfill their burning ambition to make a contribution to Britain.

What seems to have happened is that the places have been taken up with short-term economic migrants or, in other, non-jargon, words, East Europeans who come here to get jobs, earn some money and learn English. It is a little unclear from the accounts which places they had taken up.

The free ones are for those on benefit, whereas we are talking about people who come here to get jobs. Could it be that these people, who are supposed to be undercutting English workers by accepting lower wages are actually spending part of their money on English lessons?

This is not what the government wants to see as those places are supposed to be for the long-term settlers, even if these do not take jobs or earn money. The government and Mr Denham in particular want to see some changes:

Denham said that the government's national priorities for Esol funding include legal immigrants expected to stay in the country for the foreseeable future; women who had been excluded, for some reason, from classes, particularly those with children under the age of 16; parents or carers within families at risk of multiple or complex problems; people with no or minimal literacy in their own language; people without secondary education; and refugees and asylum seekers still in the country beyond six months, awaiting a decision on their status or who cannot return home.

A goodly proportion of those people are not going to take up the free classes, no matter how available they are and, when it comes to the women, they will not be allowed to do so by their menfolk, which will continue to cause problems.

We are, in other words, going round in circles. The only thing that the government might introduce is compulsory payment for ESOL classes to be made by the East Europeans and there we may run into difficulties with the EU, since it is clear discrimination.

The idea, however, that the government can solve problems of social cohesion as the latest modish expression has it by “targeting” certain groups that have had every opportunity to learn English but have not done so, is the purest moonshine.

Oh, and while we are on the subject, could we have all children learning English at school?
Posted by Helen at 02:09