The face(s) of democracy The American presidential election of 2008 seems to have been going on for a very long time, not least because we have an unusual situation in that there is no incumbent in the fight. Both parties are starting from scratch and neither has an obvious winner among the candidates.

The only question that seriously occupied me for some time was what will all the BDS sufferers do next January when George W. Bush will no longer be president? I have long ago given up hope that they will accept that he was president for only 8 years and many events happened in the United States and in the world without his involvement.

For all of that, my colleague and I decided not to write about the process until it is a little more advanced – say, Super Tuesday or so.

Two things made me go against that decision. One is the usual blather about the need for non-Americans to take part in the election in order to ensure that those misguided yanks elect someone the tranzis and European elites will like who will understand the complexity of the modern world.

We wrote about it in 2004 when the Bush-Kerry campaign was going on and there was a desperate feeling on this side of the Pond among the various anti-American groups on all sides of the political spectrum that Bush must not be allowed to win. Well, as it happens, the American people thought otherwise.

The story is back again. So far, as much as we can tell, only one voice has been raised in that demand in Europe and that was in Belgium of all places, where the acting government is headed by Guy Verhofstadt, who was defeated at the last election. Brussels Journal reports as does Newsbusters.org:

American presidential elections are not “home affairs.” American decisions have repercussions all over the globe. The American mortgage crisis affects banks in Europe. The insatiable American demand for oil makes the Arabian sheiks rich. The American refusal to care for the environment causes the North Pole ice to melt and coastal areas in Asia to flood. A weakened dollar and an immense budget deficit affect the global economy.

Hence, the world should be given the right to vote. Because the current situation is a blatant case of taxation without representation, against which the Americans rebelled in 1776. But of course the world will not be allowed to vote. The best we can hope for is that the Americans choose a leader who is deeply aware of the U.S.’s responsibility, as a superpower, for the rest of mankind.

The international community was able to limit America’s hegemony somewhat through organisations for international consultation, agreements and the corresponding judicial apparatus. But that system is in crisis, partly through the actions of the current American president.

I am not going to waste valuable time analyzing this extraordinary piffle but shall merely ask two questions: how exactly is the rest of the world going to vote in the American elections, given that most of it has no elections to vote in at home; and would Evita Neefs agree that Europeans should be allowed to vote in their own elections and, indeed, on whether they want the Constitutional Reform Lisbon Treaty imposed on them.

I have no idea what the answer to the first question will be but I can guess the second one.

Sad to say, in Britain it was Simon Heffer who produced a similar canard, though there may be a tongue in cheek aspect to this. Let us hope so, anyway.

Many Britons will feel it would be rather nice to have a vote, too. Well, maybe not a whole vote: I would settle for one worth 50 per cent of those cast by American citizens.

After all, since we are a strategic colony of the US, it would be nice to have even a marginal say in how the empire chooses to dispose our goodwill and our blood and treasure. Such considerations were explicit in the founding of the US, and what's sauce for the goose...

In the meantime, on the other side of the Pond, democracy seems to be triumphant. The second reason for my decision to break my silence about the 2008 presidential election is the “unexpected” results from the New Hampshire Primaries. 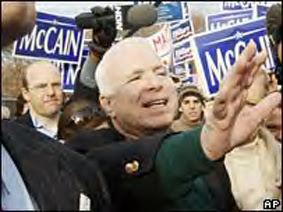 Hillary Clinton won the Democrat Primary and John McCain the Republican. Whatever one’s private view may be of the two candidates there can be nothing but pleasure in watching all the media experts and analysts squirm.

Having put all their efforts behind la Clinton they started scampering after the Iowa Caucuses (not Primaries says she, gritting her teeth) when Barack Obama came out top. Suddenly the man became a mini-messiah for all and his fatuous “message” of change (to what?) was the mantra to be repeated reverently.

What a joy it is to see them all wiping egg off their faces today.

Incidentally, given Obama’s complete ignorance about matters foreign, one wonders whether all those sophisticated Europeans are going to ask whether he knows who the president of Pakistan is. Given that at one point Obama was suggesting an attack on that country, it is of some interest whether he knows anything about it or even where it is. But hey, Obama has a nice smile and is promising change and reconciliation, though his attendance of a particularly virulent church gives one furiously to think.

Of course, less attention was being paid to the Republican field because it is a given that the GOP is never going to win real elections. Except when they do, which is frequently and then we have a great shout of “we wuz robbed”.

For all of that, Mike Huckabee’s unexpected victory in Iowa and John McCain (written off by the media as a has-been) winning in New Hampshire is a good thing for the people of the United States and for all of us who believe in democracy as the least worst form of government. (Yes, yes, I know: define democracy. Well, not this time.)

So, dear readers, look carefully at those two unlovely pictures. These are the faces of democracy; of a system where the people are the ones to elect their government and, separately, their legislature. Not only that, but all members of a party have the right to vote for the candidate. Think about it.
Posted by Helen at 12:07