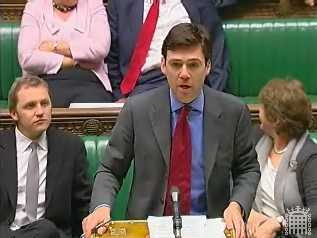 A plaintive letter from Tory MP Peter Bone finds its way into The Daily Telegraph today. Bone is complaining that on Tuesday night, the House of Commons passed the European Communities Finance Bill. This committed the British taxpayer, according to Treasury figures, to contribute more than £100 billion between now and 2013 to the EU - enough money to run the National Health Service for a year.

One might have thought, writes Bone, this took detailed, lengthy and considered debate. One would be wrong. The Government imposed a guillotine on the Bill and debate lasted only 208 minutes. This is equivalent to spending £481 million a minute.

He then tells us that MPs were severely restricted in the time they could speak and scrutinise the Bill. Clearly the Government wanted this measure to slip through unnoticed, so that the appalling deal done by ministers in negotiating away part of our EU rebate would go unnoticed.

Bone then adds that the government claims the deal is good for Britain, yet our net contributions to the EU will increase from an already horrendously large £4.7 billion to £6.8 billion in 2011. This is the same government, he concludes, that won't honour the police pay review.

However, when it comes to the government’s attitude to the Bill, Mr Bone might also care to read the Channel 4 report, published a day before the debate, when we were advised that the Conservatives had "promised to mount a last-ditch battle to preserve the rebate, secured by Margaret Thatcher in 1984." They had tabled an amendment which would delay any cut until after reform of the EU's controversial Common Agricultural Policy (CAP). 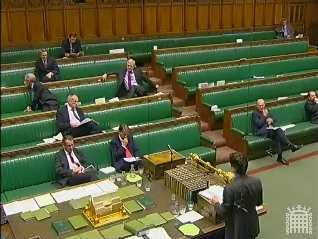 However, with Andy Burnham, the chief secretary to the treasury, holding the fort for the government (pictured top left), we can see from this picture (right) the extent of the "last-ditch battle" that the Conservative had promised.

John Redwood, in his blog tries to put a gloss on it but, the unpleasant truth is that the issue never took off.

So, did Channel 4 over egg the pudding in claiming that there would be a "last-ditch battle"? One suspects not. The text of their report was clearly based on a Conservative Party press release issued on the Monday. But, when it came to the crunch, the Tories did not deliver, with the result that not a single newspaper reported the debate.

And, despite the rhetoric, you can expect much of the same for the constitutional Lisbon treaty debate.