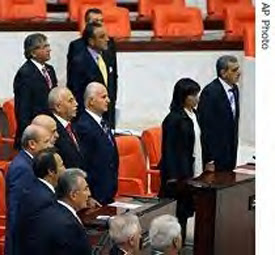 The new Turkish Parliament has been sworn in and there are many uncertainties. The AK Party that leans towards Islam has a comfortable majority and that has caused some worries.

The Prime Minister, Recep Tayyip Erdogan, proclaimed immediately after the election that his party was determined to preserve Turkey's secular values.

This was repeated at the opening of the Parliament:

The oldest member of parliament, Sukru Elekdag, of the secular People's Republican Party, was given the traditional honor of chairing the opening session. In his address to the newly elected deputies, he appealed for unity by directly quoting the words of Prime Minister Recep Tayyip Erdogan, the leader of the ruling Justice and Development party. He said "We have common values and goals that unite us." quoting a statement by the prime minister after his party's recent victory. He continued with the rest of Mr. Erdogan's remark: "We will improve our republic which is a democratic, secular, social state of law, and we will never make concessions on these values."

The question of the President remains outstanding and a constitutional referendum has been promised for October 22, which may well decide that there should be direct presidential elections in the country in future. 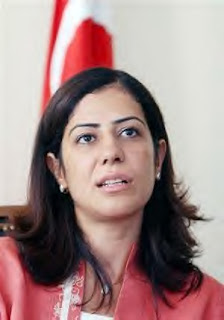 In the meantime a great deal of attention is focused on the 21 Kurdish MPs, all but one of whom are members of the Kurdish Democratic Society Party that has been accused of having links with the PKK, which is on European and American lists of terrorist groups. Aylat Akat Ata is one of the Kurdish MPs.

The Kurdish MPs were banned from the Turkish Parliament in 1994 because of the alleged links with the PKK and their return is seen as a hopeful sign that some solution will be found to the Kurdish problem. Over the last few years the Turkish government has made several concessions to the Kurds, allowing them to use their language and to be educated in it.

Unfortunately, other news from the Kurdish region is not good. Eight people have been kidnapped by the PKK a couple of days ago. Three soldiers have been killed and one wounded by a roadside bomb blast also set up by the PKK.

The Turkish army has said repeatedly that terrorist groups were organized and terrorist activity was planned in Iraqi Kurdistan, threatening to invade the area to deal with the PKK and its supporters.

With the PKK indulging in terrorist activities the government and the army are unlikely to indulge in an open rift.