A trip to Tripoli 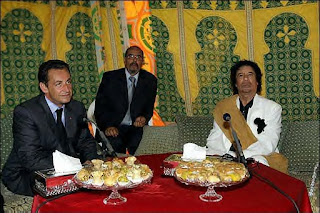 At first the release of the Bulgarian medics after eight years of incarceration and torture by the Libyan government was greeted joyfully by all believers in the European project and the need for “Europe” to have a common foreign policy. Here is a wonderful example, they chortled, of “soft power” that is sooooooooooo much more effective than the nasty hard power of the Americans.

An article in Transitions Online, a largely Europhile site that deals with Eastern Europe, the Balkans and the former Soviet Union, breathes a sigh of relief at Europe finally showing willingness to work together and exert pressure as a single entity after a period of discord, what with arguments about Turkey’s possible entry and those cheeky referendum results in France and the Netherlands.

As our readers undoubtedly expect, this blog does not precisely agree with that judgement. We are, as it happens, not alone. Here is a longish piece that sums up the situation as it appears at this point.