Saddam "the federator of Europe" 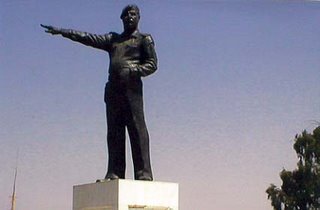 From the European Coal and Steel Community, based on the "Schuman Plan" of 1950, the progression to the Treaty of Rome in 1957 looks, from the distance of nearly 50 years, to have been a smooth and natural progression.

But, as we describe in The Great Deception, the Treaty of Rome was a close-run thing. Negotiations which has begun in earnest in early 1956 had, with the passage of ten months, become hopelessly stalled. None of the parties, particularly France and Germany, could see a way forward.

What broke the impasse, however, was the Suez Crisis or, more particularly, the unilateral decision by Anthony Eden to abort the campaign, without even informing his French counterpart. Adenauer, who was in Paris at the time, consulting the French Cabinet, urged the prime minister to "make Europe your revenge".

So dramatic has been the impact of the crisis that the French did precisely that and previously insurmountable differences between them and the Germans melted away. As the deal came together, therefore, a colleague of Jean Monnet suggested, only half-jokingly, that a statue should be erected to the man who had triggered the crisis, Gamel Abdel Nasser, "the federator of Europe".

That a Middle-East tyrant should have had such a pivotal role in the creation of the European Union is hugely ironic but an even greater irony is that history appears to be repeating itself.

That, at least, is one construction which can be put on a Populus opinion poll reported in The Times yesterday, which shows that the British public has become increasingly cool towards American policy and critical of its role in the world after the sustained violence in Iraq.

The survey indicates that fewer than half the public believe that America is a force for good in the world and – as sentiment turns away from America - nearly two thirds believe that Britain’s future lies more with Europe than with the US.

The exact figure is 65 percent, responding positively when asked of they believed that "Britain's future lies more with Europe than America". In March 2003, before the invasion, about 71 percent believed that "the conduct of the US towards Iraq makes it more important than ever that Britain is at the heart of Europe".

Care must be exercised in interpreting this result as surveys on sentiment towards "Europe" – as with other issues – depend notoriously in the context of the question. But it does suggest that the steady, malign drip of anti-Americanism is not without its perils, if turning away from the US creates a vacuum which is filled by the European Union.

Generally, the antithesis to European integration is most often seen as Atlanticism, with which Eurosceptics generally tend to be quite comfortable. However, almost entirely as a result of the Iraq War, there is a strand of virulent anti-Americanism emerging in some parts of the Eurosceptic movement, often thinly disguised as anti-Bush sentiment.

If this brings increasing numbers of people closer to the European camp – sometimes only because they hate the US more than they hate the EU – then, as the trigger of the crisis that brought this about, maybe some Europhiles in the future will be considering whether to raise a statue to that other Middle-East tyrant, Saddam Hussein, "the federator of Europe".