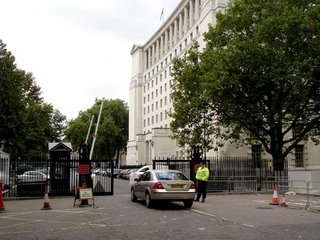 This weekend, I had dinner with a very senior politician – one who had had direct and prolonged experience of the innermost workings of the Ministry of Defence and close working contacts with prime ministers.

Amongst other things, my politician confirmed that which we have worked out for ourselves , that there is, and has been for many years – before even the Blair regime – a "Europe first" defence procurement policy. However, I heard details of how this extends right through the procurement process to a degree which is quite staggering. Quite deliberately, at times, inferior, old fashioned and more expensive European equipment is bought, even where the more modern and effective equipment from the United States is actually cheaper.

What confuses the outside observer, though, is that the MoD is riven with factional infighting between competing tribes and not a few purchasing officers have found ways of circumventing the policy and breaking the "Europe first" rule. This allows gainsayers to leap triumphantly on the few exceptions and dispute its existence, even though it is well established and supported at the very highest level.

But what also emerged was confirmation of the thesis that we ourselves on this blog have been struggling to put together – that there are two separate and distinct defence policies being conducted by this government. The one – to which all the resources are being devoted is the "European" defence policy while the poor relative is the "trans-Atlantic" policy which is at its most visible in our support for the US-led coalition in Iraq.

When this is put together with the flurry of media coverage over the weekend about equipment inadequacies, we are able to draw the incontrovertible conclusion that the government is simply not prepared to finance the war effort in Iraq. Further, so poor is the equipment and so lacking in numbers are our troops, that we are able to draw down increasing evidence from the public domain that, into order to minimise politically embarrassing casualties, the Army has ceased to play any effective role in the policing of Southern Iraq.

Many areas of Basra and Al-Amarah have thus become "no go" areas to British patrols because they are simply too dangerous, leaving our presence confined to the safer and less populated areas in what is now a token operation. This is spelt out in some detail in the Independent on Sunday yesterday, which reports that British forces are facing rising violence among Shia Muslim factions in southern Iraq, but are powerless to contain it.

The paper also adds that both British and Iraqi authorities were seeking to play down the situation – each for their own reasons. For the British government, it is keen to project a charade that the Iraqi authorities are gaining in strength and competence so that it can hand over to them and declare "mission accomplished", bring the troops back in "triumph".

The reason for the inadequacy of the British forces is, as we continue to report, primarily due to the priority given to equipping the European Rapid Reaction Force. The essential problem is that the equipment required to take on and defeat the counterinsurgency is so specialised that it has no place in the EU's air-portable rapid reaction force structure. Set on withdrawing from Iraq at the first possible opportunity, the government is simply not prepared to invest in specialist equipment which will get limited use and will then not be suitable for the EU force.

We have seen already how this is putting our soldiers lives at risk, through the MoD insistence on keeping wholly inadequate Land Rovers in place, but this is only the tip of the iceberg.

This is brought to the fore by that stupid and ignorant piece in The Sunday Telegraph where correspondent Sean Rayment is quivering with excitement over the emergence in theatre of something entirely new to him, "the armour-piercing 'explosively formed projectile' or EFP, also known as a shaped charge." This, the excited Rayment tells us, "fires directly into an armoured vehicle, inflicting death or terrible injuries on troops inside."

And what particularly gets Rayment worked up is his "discovery" that, "Government scientists have established that the mines are precision-made weapons which have been turned on a lathe by craftsmen trained in the manufacture of munitions," probably originating from Iran. He tells us that, "a source from the American military, who has been working closely with British scientists, said that the insurgents have perfected the design of the weapon and know exactly where to place it to ensure maximum damage to coalition vehicles." 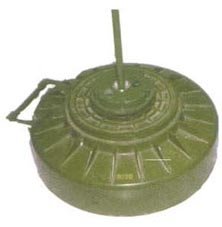 The ignorance manifest in this piece is simply demonstrated by the fact that these weapons are not at all new. As we have reported before, they appeared in Bosnia in the early 90s, in the form of the TMRP-6 mine.

The fact that it is called a "mine", however, should not be allowed to confuse the situation. The Serbs not only buried these devices, but became adept at fixing them to the walls of buildings alongside roads or hanging them from telegraph poles. Ready to be triggered by passing vehicles. In other words, these devices were being used in exactly the same way as Rayment's "explosively formed projectile" (which is exactly what they were), with like effect.

Nor indeed are these the most deadly devices in the Iraqi theatre. Not least of these is the standard BK-29 HEAT-MP round, a 125mm Russian shell used by the T 72 tank. In dumps and caches all over Iraq, there are estimated hundreds of thousands of these shells, already in the hand of insurgents. One of these shells, suitably positioned, and detonated by a remote device, can easily take out an Abrams or Challenger Main Battle Tank and, indeed, several Abrams have been lost to these and similar devices - one only last month.

Further, given that only an estimated 20 of the devices have been brought in, compared with 11,000 roadside bombings in Iraq last year (compared with 5,607 in 2004), this is by no means the devastating problem that Rayment makes it out to be.

It can be no accident, though, that Rayment believes this type of device to be "new" as other journalists are reporting the same thing, which suggests that are buying government "spin" on this. Together with what appears to be government-inspired propaganda that there is somehow no defence against it, this "spin" is particularly wicked.

So well known is this type of threat that, in April 1999, the then under-secretary of state for defence, John Spellar, actually hosted a press briefing on it. And, as we know, by then, successful counter-measures had already been developed.

But, by allowing ignorant and gullible journalists to run away with the idea that this is somehow a new and different threat, the government absolves itself from any failure to protect our troops from it and, by implying that there is no defence against, calls for introduction of counter-measures are sidestepped.

Once again, we are back where we started. Introducing counter-measures in theatre would be expensive and the money is already spoken-for. In order to pursue European defence integration, therefore, it is more expedient to let troops die, especially – as my political informant told me – the MoD is confident that it can always rely on an ignorant and indifferent media not to report the facts.