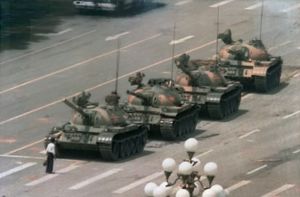 June 4, among other things of importance to Etonians, is also the anniversary of the Tiananmen Square massacre when the tanks moved in to crush the peaceful students’ demonstration. (On the left is the iconic picture that went round the world at the time.)

It is a picture you will not find on Google in China. The organization that has paraded its liberal and humanitarian credentials, promising to do no evil, did a deal with the Chinese government. In return for being allowed set up Google.cn, they promised to censor a good deal of the material.

Thus if you try to find Tiananmen Square on Google.cn, you see lots of yummy touristy pictures, including this one of children parading with red flags. It doesn’t matter, Sergey Brin, one of the founders of Google, whines. If Chinese want to see the real information they go to the main Google site, Google.com. Except that it is not accessible in Chinese provinces, points out Reporters without Borders.

It seems that Google feels it ought to rethink its whole position on China, with Brin saying that perhaps a principled approach now makes more sense. Maybe. Then again, maybe not.

Brin, in Washington to lobby the Senate

“to approve a plan that would prevent telephone and cable companies from collecting premium fees from companies such as Google, Microsoft and Yahoo! for faster delivery of their services”,

because that might break the stranglehold those companies have on delivery of internet services, had to answer some searching questions on the subject of China.

It’s so unfair, he said. After all, everybody else does the same – agrees to do what the Chinese government demands and they don’t get an international outcry.

This is not precisely true. There were outcries when Microsoft and Yahoo! behaved despicably in China. But it is Google’s founders who strut around in self-righteous prattishness. So it is only fair that Google should get the biggest share of moral condemnation.