A certain lack of focus 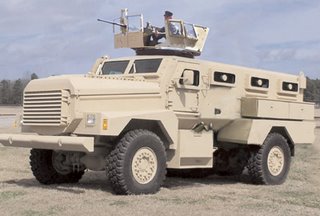 Despite the plethora of news yesterday, the important contribution by Con Coughlin to the defence debate in The Telegraph should not be overlooked.

In a thoughtful opinion piece headed "It's time Blair supported our Forces", he notes that Tony Blair has been loyally served by Britain's Armed Forces but, he writes, "it is unlikely that many members of the Armed Forces would say the same today about the Blair Government."

Having served their country with courage, Coughlin continues, the least our servicemen and women might have expected in return was the support, if not the gratitude, of the Government. In fact, the opposite has proved to be the case.

Rightly, much of the piece is then focused on the recent prosecution of the Guardsmen, arguing that the "Government's most egregious act of betrayal has been its eagerness to prosecute British soldiers for war crimes on what appear to be the flimsiest of pretexts."

I take his point and do not in any way seek to diminish it but regret nevertheless, that he devotes only one paragraph to the ongoing scandal of the poor equipment supplied to our troops, summed up by this comment: 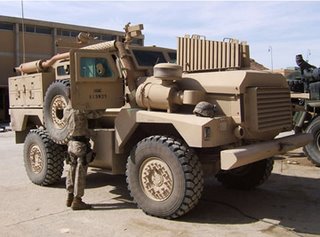 Spending has been reduced to such a level that the Army is unable even to provide troops serving in Iraq and Afghanistan with sufficient protection against the sophisticated roadside bombs being used to kill and maim them by Islamic militants.

This is in stark contrast to the news from the US, supplied by the indispensable Defense Industry Daily, which reports on yet another contract for force protection vehicles, in this case a Cougar variant (above left), manufactured, ironically, by BAE Land Systems.

A link from that report takes you to an earlier variant (immediately above) while another report deals with developments in gun shields (below), with an expanded article here.

It is easy and fashionable to deride the US for its mistakes in the immediate post-victory phase of the Iraqi war, and too many people seem to take a somewhat misplaced pleasure in pointing out how soooo superior our tactics have been in Basra. But, with the situation in the southern province going "belly up", we are beginning to see that our forces are both ill-prepared and ill-equipped for the more hostile environment, putting our troops at risk.

By contrast, we see that the US forces are taking "force protection" very seriously indeed, which points up an endearing and impressive facet of the American character. While they do make plenty of mistakes, they also seem to be able to admit them more readily and devote their considerable ingenuity and capabilities to finding solutions.

That is certainly not a characteristic notable within the portals of the MoD and this comment, appended to the online edition of Coughlin's article, from Chas Villiers has special relevance:

My son went to the Iraq war at the start of the invasion, but beforehand he and his colleagues spent hundreds of pounds, mostly on their credit cards, to buy essential kit for the task ahead of them. An MP raised this issue in the House at the time but the government fobbed it off as "vanity purchases". Amongst the vanity items he bought I don't remember seeing a Harrods logo on his water bottles, or Armani sand goggles, Hugo Boss body armour, Timberland desert boots, a Cartier compass or even a Gucci combat knife! The boots he was offered by the military were 1960s issue and a size too small, and they were told that for any missing kit to "steal it off the yanks when you get there!" We also supplied him with regular food parcels because he lived off Compo ration packs for weeks on end, which are designed for short term use only! My son and many other career soldiers hurt at how shabbily they were treated by the government, left the military immediately after the war. To add insult to injury they were told that they even have to apply for their medals! Perhaps Blair and Hoon should shove their medals where the desert sun don't shine!

Underlying this, undoubtedly, is a lack of commitment on the part of the MoD and the political establishment. While the Americans are concentrating on the "war on terror" and putting their energies into defeating the Iraqi insurgency, British strategic thinking is split, on the one hand, between supporting the US effort and, on the other, pursuing the separate and to a very great extent incompatible objective of European defence integration. 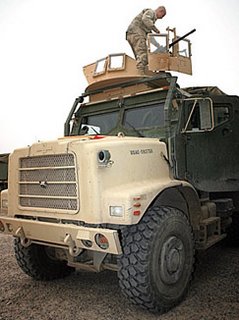 Here Coughlin does miss the point in claiming that defence "spending has been reduced" when, in fact, it has increased. But so much is being devoted to re-equipping and re-structuring our forces to meet the 2010 "Headline Goals" in order that the UK can meet Blair's commitment to the European Rapid Reaction force, that there is nothing left over – as Chas Villiers' comment indicates - for even the basic necessities, much less new equipment of the type being supplied to the US forces.

Almost as important, though, is the lack of focus, which is brought home today by a report issued this month by the Brussels-based Institute for Security and International Studies. Entitled, "Developing EU Civil Military Co-ordination: The Role of the new Civilian Cell", this reminds us of how much energy and thinking is going into developing an "autonomous EU military capability" marking the "departure from the uniqueness that some used to attribute to the EU as a civilian power".

Therein seems to me the core of our problems. As a medium-sized power, we have neither the financial resource nor the intellectual capability to deal with two entirely separate objectives at the same time – defeating the insurgency in Iraq and pursuing European defence integration. We risk doing either or both badly and, in the former, the result will most definitely bring with it the risk of failure and the preventable deaths of our troops.

Thus, to return to Coughlin's piece, headed, "It's time Blair supported our Forces", it is also time for our government to decide which of the two objectives is most important to it – and us as a nation. It should then put its resources into achieving success in one of them. In this game, divided objectives and lack of focus can be fatal.