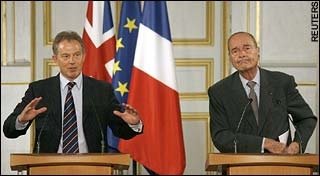 At last week's Anglo-French summit, while all attention was on the nuclear energy deal, Blair also agreed to step up arms co-operation with France, focusing on the joint development of missiles and unmanned aerial vehicles. This is yet another major step towards European defence integration.

Furthermore, the deal comes only two weeks after Blair was in Washington meeting Bush for a bilateral summit, one of the highlights of which was the apparent rapprochement over the sharing of JSF technology.

Given that the long-standing spat over the JSF was seen as a stress point for the "special relationship", the apparent agreement (the details of the deal have yet to be finalised) was seen by many commentators as bringing the two allies back on track, especially in view of the joint statement which included the declaration that both sides "strengthen and deepen the relationship between their defence establishments, achieve fully interoperable forces and leverage the strength of their industries."

Last Friday, however, after he had hopped over the Channel to see his old mate Jacques Chirac for what is their last annual summit - with L'Escroc stepping down for the French presidential election, when a successor will take his place - Blair was up to his old tricks, playing both sides of the fence.

Continuing the joint initiative at the St. Malo summit of 1998, which led to the creation of the European Security and Defence Policy and the agreement to set up the European Rapid Reaction Force, Blair and Chirac committed "both countries to strengthen the Europeans' capability to contribute to international peace and security."

They agreed that the co-operation on aircraft-carriers was "an important symbol of this bilateral commitment" and declared that their "common commitment to peace support operations and development of European capabilities remain at the core of our priorities."

Released on the French Embassy website , but curiously unreported by the mainstream media and entirely absent from the No. 10 website which reported on the summit, is a lengthy joint declaration setting out the details of the defence agreement.

The agreement makes it clear that the two countries intend to encourage greater and more systematic co-operation on key projects, and especially "the development of generic underpinning technologies associated with UAVs". They intend to establish a "high-level working group from British and French government and industry" to consider ways to build upon and enhance existing co-operation in armaments programs. That group is to report by the end of the year.

Both countries also agreed that the European Defence Agency "must be a lever in the growth of the European defence effort," and pledged to support its activities "in all its areas of competence". This includes plugging gaps in European defence capabilities, especially in strategic transport, air refuelling and communications. In research and technology the, declaration said, the Agency "must encourage European States to step up their efforts by identifying common projects". 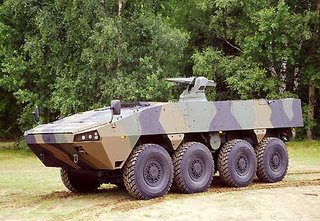 The United Kingdom and France, they conclude: "have already brought their work on lightweight radar to the agency, and wish to do the same on armoured vehicle technologies at the appropriate time."

This latter declaration is significant in that it follows on from the news on 31 May 2006 when the MoD was reported to be scaling down its plans for a high-tech FRES platform and considering buying an off-the-shelf design from a European manufacturer. Here now is a further indication that the British government is planning to harmonise its medium-weight armoured capability with European forces.

As significant is the commitment to co-operate further on UAV technology. Like the FRES programme, this also represents a progressive cleavage from the US. This became apparent when, in June last year, the UK pulled out of the £10bn project called the Future Offensive Air System carried out in co-operation with the Americans for seven years, aimed at on producing a high-tech Unmanned Combat Aerial Vehicle (UCAV) by around 2018 when the RAF's fleet of Tornado GR4s is expected to reach the end of its operational life. 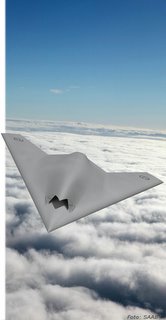 At that time, the "definition phase" was not due for completion until 2008 and industry observers reported that the UK government was thinking about joining the French in its "Neuron" UCAV project.

Since then, we have seen the French programme progress to the development of a full prototype, followed in December when John Reid announced that there were no plans to develop any further manned combat aircraft in the UK.

In January, there then followed an announcement that France and the United Kingdom were jointly to examine lightweight radar technology for use on small platforms such as UAVs, under the aegis of the European Defence Agency. Now, this latest declaration takes the UK that little step further along the path where a joint UCAV programme – under the "leadership" of the French - will become an inevitability.

The best complexion that can be put on this is that Blair is trying to maintain the traditional British policy of providing a "bridge" between the United States and Europe. Additionally, this latest declaration may in part be compensation to Chirac over the JSF.

On this, we were certain that Blair was going to dump this advanced aircraft in favour of the French Rafale, using the second engine cancellation and the refusal to share technology as excuses.

But now Congress has all but restored the funding for the second engine and Bush has agreed the deal on technology sharing, Blair has been outflanked and will find it very difficult to pull out of the JSF project.

But, as we remarked at the time, the French are now probably discounting the JSF as "yesterday's project" and, with procurement decisions made for ten and twenty years hence, they are looking to harmonise the next generation technology, with the thinking focused on unmanned aircraft.

Whatever the motivation though, there is no doubt that the UK government is being less than frank about its agenda, not least since the full defence declaration has only been published on the French embassy site. Furthermore, there is a suspicion that the MoD is carrying out a "disinformation programme" to take the ever-gullible MSM off the scent. 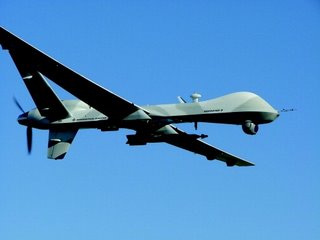 Only the previous week, the Telegraph ran a "Boys Own" piece about UK involvement in US Predator UAV operations in Iraq, citing this as an example of the health of the "special relationship". It turns out that several papers ran this story, including The Guardian and the Daily Mail.

For the MoD suddenly to give widespread media access to a previously "top secret" programme shrieks of news management. That the news should be released just one week before Blair does a deal with Chirac on UAVs seems to be too much of a coincidence.

Interestingly, one of the main characteristics of the French "Neuron" system will be its "stealth" capabilities. The way the whole issue is being handled though, the UK is using capabilities of its own - playing "stealth politics". I hope the US State Department is able to penetrate the fog.