The silence of the fat lady 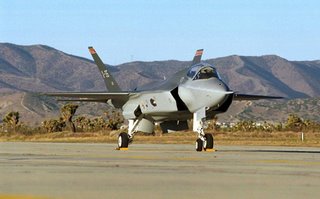 We forgot our own dictum – it ain't over until the fat lady sings. And the fat lady is strangely silent on the vexed matter of the Joint Strike Fighter.

Thus, despite the unexpected agreement at the Bush-Blair summit on 27 May, when we were told that the technology-sharing issues were to be resolved, it seems there was the little matter of the small print.

On Wednesday, therefore, Military.com was telling us that the detailed negotiations between US and British officials had reached an impasse on the eve of a "high-level, bilateral meeting" that was scheduled yesterday between US deputy defense secretary Gordon England and Bill Jeffrey, the UK's Defence Ministry's permanent secretary.

This was intended to produce a "statement of principles" to facilitate sharing technologies and secrets with Britain to give it means to maintain and upgrade its notional JSF fleet independent of the United States.

At the time of the Military.com report, it was thought that the agreement was not likely to be reached this week, with "sources involved in the negotiations" saying that the discussions on the statement of principles had broken down earlier in the week.

Now, the plot seems to be thickening nicely. Reuters has reported that agreement was reached yesterday with the eight country partners on a "long-term plan" for the aircraft, although not between the United States and Britain on the technology-transfer plan "crucial to completion of the deal".

A British embassy spokesman is saying that England and Jeffrey had acknowledged the "good work" toward a deal "in a technically complex area". But the only agreement is "to take stock again in a month or so's time," while the Americans are dead-batting enquiries, saying "more time needed, but no snag."

Of course, since the original Blair-Bush summit, we have had the Blair-Chirac summit and the as-yet unconfirmed news that Gordon Brown might be considering scrapping or delaying the proposed aircraft carriers.

Putting all that together, heaven knows what is really going on. The only thing certain, I suppose, is that whatever it is, you won't hear it from the MSM, with the possible exception of The Business.