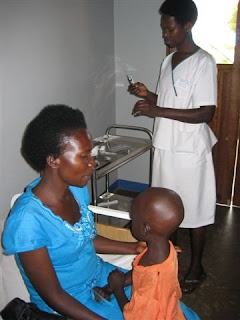 "…we cannot abandon those people. The European Union must put money where the needs are: help relieve Africa from hunger, disease and abuse of human and civil rights."

So burbles the communication commissar, Margot Wallström on her increasingly dire blog. Yet all she demonstrates with her vapid prattling is how totally divorced she is from any semblance of reality.

That reality as it stands is that the European Union – amongst its may other sins - is unarguably directly responsible for the death of upwards of 110,000 children in Uganda alone, who succumb to the unfashionable but deadly disease of malaria.

This we have covered several times, most recently here chronicling how the EU has played a particularly wicked and sinister role. Through the years, it has sought to dissuade Ugandan president Yoweri Museveni from taking the simple and cheap measure of reintroducing DDT, a measure that would not only save those thousands of lives but have an immediate beneficial effect on the Ugandan economy.

To his eternal credit, Museveni has resisted the increasingly aggressive blackmail and has expressed a determination to go ahead with this much-needed health measure. But, according to The East African, such is the insidious pressure exerted by the EU’s head of the Economic, Trade and Social Sectors desk in Uganda, who goes by the name of Tom Vens, that agricultural exporters have taken fright.

They have petitioned Museveni, asking him to stop the planned use of DDT, arguing that its used "will turn buyers against their products". They fear it will "negatively impact on Uganda's export market," creating a stigma that will then "attach to Uganda's export products will affect all sectors."

Vens, in the weasel words that have characterised the EU's whole approach to the issue, is now saying that there will be no official EU ban on the country if it uses DDT according to laid down international conventions, but… And that is a huge "but".

He is telling the exporters that "consumer organisations are free to react anyway they choose to," adding that, "If the strict controls that should be put in place when DDT is used are not fully adhered to, and there is a risk of contamination of the food chain, it will not automatically lead to a ban on food products, but it will mean that that particular consignment cannot be sent to Europe."

For the exporters, a nod is as good as a wink, and you can bet that the EU will be monitoring residues in Ugandan exports with an enthusiasm that their officials normally only reserve for their monthly pay cheques.

For all the emoting of the fragrant one, therefore, Uganda is going to have a tough time of this, with absolutely no help from the EU. If that dire organisation wanted to put Wallström's words into practice, it could offer active help with the DDT spraying programme, and then encourage member state importers to continue buying product.

That it does not makes a mockery of its publicly expressed good intentions, but – I suppose – that is only to be expected. What really hacks me off about this whole episode, therefore, is the way the EU is allowed to get away with its callous indifference to human life.

This issue has been grumbling on for years, yet the British media – so voluble about Live8 and African poverty - has been almost totally silent on this, as indeed has the care Blair.

Equally, on an issue where he could validly demonstrate his "modern compassionate Conservatism", Cameron is utterly silent, as is UKIP, for which this issue would be an absolute gift, if there was anyone in that party with the brains even to realise what was going on.

But, Uganda is a long, long way from here. As long as we enjoy the purity of food free from the "deadly" DDT, who cares if hundreds of thousands of people are dying? Hey! They're only Africans.