Be nice to the French, Gordie 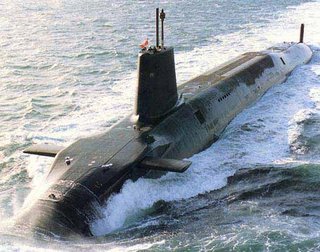 You have to give it to little Gordie. Not even prime minister yet (if ever) and he is already making the "big decisions". And they don't get much bigger than deciding to renew Britain's "independent" nuclear deterrent.

That certainly has got the BBC nicely worked up, and the Guardian too, not least because the estimates of the cost vary from £10bn to £25bn, depending on what type of new missiles or submarines are chosen.

In fact, generally, Mr Brown was very robust about his future defence policy in his Mansion House speech last night, declaring that he would be, “Strong in defence in fighting terrorism, upholding Nato, supporting our armed forces at home and abroad, and retaining our independent nuclear deterrent." For all the world he sounded just like Liam Fox, complete with exactly the same commitment to Nato – thus, ostensibly kicking European defence integration into touch. 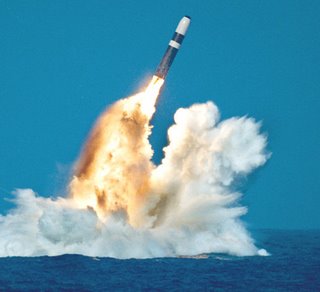 But, Brown's declaration will also renew the argument about whether the deterrent is truly independent, not least because the missiles will be made by the US – probably Lockheed Missiles and Systems - and we will be beholden to the US for the supply and then the ongoing maintenance.

As before though, we will be making the warheads – which gives us the notional indpendence, except for one very important difference. As we recorded in November last year, the last remaining military explosives factory in the UK is being closed down, and the production transferred to France.

Included in that transfer is the vital and very special technology for making the conventional explosives which are required to trigger a nuclear bomb, without which we will have no deterrent at all.

If Mr Brown wants his "independent" nuclear deterrent, therefore, he had better not be too robust about his support for Nato. Au contraire, he will need to be very, very nice to the French - or he won't get his bombs. I wonder if anyone has bothered to tell him this?