We are all very grateful… 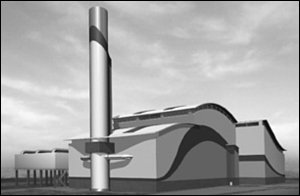 One cannot help but smile, albeit through gritted teeth, at the outrage of the Greens at the news yesterday of government approval for a waste incinerator in London, thought to be the largest in Europe, 16 years and two public inquiries after plans were first mooted for the site.

The Department of Trade and Industry is saying that the £200m plant, to be located in Belvedere, south-east London - on the south bank of the Thames opposite the old Ford works at Dagenham - will help tackle the city's serious waste problem. It is projected to burn up to 585,000 tons of waste, in theory generating up to 72MW of electricity annually.

Friends of the Earth (FoE), however, are condemning it as "a step in the wrong direction in the fight against climate change," egged on by the BBC (link above) which gives plenty of space to Jenny Bates, from FoE. She complains: "The government is supposed to be promoting recycling and waste prevention but they have just allowed the biggest incinerator in Europe to be built in London." But, of the European Union, there is not a mention.

It is left, strangely, to The Guardian to spill the beans, it reporting that:

The decision shows the government's determination to press ahead with plans to burn three times more household rubbish in the next 15 years and avoid heavy penalties promised in a European Union directive to curb waste buried in landfill sites. The Belvedere project, in Bexley, on which work is expected to start by the end of the year, heralds a new wave of such incinerators, of which 16 already exist in England.

That is the truth of it. The infamous landfill directive lays down a hierarchy of options, starting with waste reduction and recycling, through incineration and thence to landfill, to be used when there is absolutely no other alternative. And since the limits of recycling capacity have already been reached, the government has no option but to sponsor the building of a massive new network of waste incinerators, probably numbering in excess of 20.

Energy minister Malcolm Wicks is also playing down the EU element. In fact, it is invisible in his statement. He is saying that: "London has a serious waste problem, much of which it currently exports to landfill in the home counties." There would, he says, be "ample residual waste to fuel the station" even if ambitious recycling targets "set by the mayor of London, Ken Livingstone", were met.

This, inevitably, is going to be the first of many. Forget Ken Livingstone (if you can). It is EU targets that require a progressive reduction in landfill, currently at about 72 percent today, to 25 percent by 2020. There is no way this can be met by recycling so incineration will have to fill the gap, rising from nine percent of total capacity to 25 percent.

This unhappy state of affairs brings out the full scale of the economic illiteracy and lack of technical knowledge of the Greens, with Jean Lambert, the Green party MEP for London, whining that the new incinerator is: "a completely inappropriate facility at a time when we should be focusing on reducing the amount of waste we produce. Instead of making energy from waste we should be harnessing the energy that has been put into the original products by reusing and recycling."

This thesis is explored further by the environmental news sheet Edie which reports research commissioned by the FoE which suggests that this waste to electricity incinerator produces more carbon dioxide from fossil fuels, such as plastics in rubbish, than a gas-fired power station. Its study also shows that the UK could invest in a real renewable energy-from-waste technology, anaerobic digestion, which takes kitchen and commercial food waste and converts it into methane that can then be burnt. The resulting residue can then be used as compost.

We are told, without any elaboration, that "opponents of the anaerobic solution argument say it would be difficult to implement on a large scale and that there are commercial obstacles to overcome."

Therein lies reality. The highly variable nature of the refuse stream and the inevitable presence of contaminants make anaerobic digestion unreliable at best, and mostly impossible. While it might work on a small scale, with a single waste stream of known composition, it has never worked on the large scale. Even if it did, the disposal of the reside requires a huge marketing operation, which for a low-value product, has never proved economic.

On the other hand, the plans for electricity generation from are also unrealistic. Again, the highly variable nature of the waste stream poses huge problems when trying to maintain even combustion, while the increase in recycling is cherry-picking high-calorific materials, reducing the energy yield from the waste stream. That, and the cost of purifying combustion gasses, means that few plants have ever been able to generate worthwhile amounts of surplus energy, while reliability has always been less than predicted, making a nonsense of economic arguments.

Such is the current madness, however, that schemes such as this set to continue, while the Greenies can't even seem to understand that it is their own insanity which is largely responsible for the problem in the first place.

But the ultimate joke is how the EU, as the proximate cause of the mess, seems to evade any responsibility for it. Thus is Rosa Kleb, aka Margaret Beckett, able to declare in Parliament during last week's European Affairs debate that "a huge proportion … of the environmental improvements that have been made in this country in recent years … have come directly as a result of European regulations".

With "improvements" like Belvedere in the offing, I am sure we are all very grateful.