Are we a nation of mummy's boys? 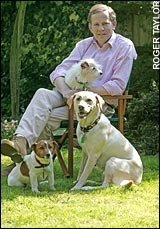 I am sure Maj Gen Andrew Ritchie, the retiring commandant of Sandhurst – with a pint in his hand and in decent company – would have some quite interesting views on the fate of the British Army. Short of that, a knowledgeable media interviewer could, I am sure, elicit some interesting observations, that would be worth reading.

That could have been a task for the Daily Telegraph but, instead they sent one of their girlie reporters to talk to him, in this case the stunningly ignorant Rachel Sylvester – with predictably dire results.

It thus takes forever to get past the "human interest" garbage – the General is taking a plumbing course… yeah! – and the compulsory trivia about the Royals, before we get to a half-way illuminating comment. With four officers who graduated from Sandhurst during Gen Ritchie's time having died in Iraq in the past year, recruitment, says Ritchie, is being damaged – something the MoD has always denied.
"There's a 'mum' factor," says the General. "Mums find Iraq deeply unpopular. They are concerned that their youngsters will be exposed to real risk and danger. And mums are hugely influential in boys and girls joining the Army."

That is a worrying development, if kids are making up their minds on the basis of what "mum" thinks, which certainly suggest something of a "mummy boy" syndrome afflicting our society. Such a nation cannot survive long as a credible military power if parents cannot let go, and the prevailing ethos is to avoid military commitments because of the risk of casualties. Would we, for instance, have fought Hitler in such circumstances?

In this context, there was a highly relevant commentary in the Telegraph's letters yesterday which touches on a debate which has yet to be seriously aired in the mainstream media. 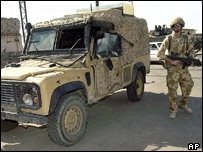 The letter is from Martyn Pocock, of Oakham, Rutland who records his sadness at the deaths of more of "our gallant servicemen who were serving with distinction in Iraq" and then goes on to write of his "despair, consternation and outrage" on reading yet again on the MoD website that the deaths were as a result of an improvised explosive device attack on "armoured Land Rovers".

"On how many more missions will our troops have to go in vehicles that were essentially designed for Northern Ireland?", Mr Pocock asks. "How many more deaths will there be before the government is held to account for not providing the money for equipment that is fit for the role?"

It would have been very interesting indeed to have heard Gen Ritchie's views on this subject, and I am sure his answers would have been highly illuminating, except that, if Sylvester put such questions to him, neither questions nor answers were published. More likely, the girlie Rachel would not have the first idea what a "snatch" was, other than a street mugging where she lost her handbag, and would not have even thought to have asked about something so "technical".

But it is issues like these that go to the heart of our defence strategy. They beg the question that, if we are to commit our troops to what Ritchie calls a "counter-insurgency situation" and, because of the "mum" factor, we are not prepared to sustain losses, how should we equip them, and at what cost? 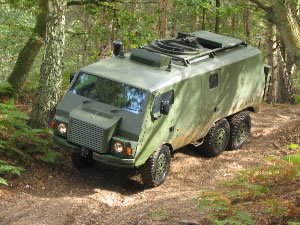 Nor even are those easy questions to answer. Mr Pocock implies that we should have better armoured vehicles and, certainly, the MoD has got the message with the emergency purchase of 80 armoured Pinzgauers for our detachment in Afghanistan – although there is no hint of or troops in Iraq being similarly equipped.

But one has to ask whether armoured patrol vehicles are necessarily the answer. We have seen in the US area of operations the progressive introduction of up-armoured Humvees, the insurgent response to which has been to increase the power of their roadside bombs and to use shaped charges which are capable of defeating the heaviest of armour. Then, there is the ever-present threat of the RPG, which can destroy an armoured Pinzgauer.

The risk is, of course, that the Army, in seeking to protect its troops, gets locked into an increasingly expensive spiral of measure and counter-measures, building ever-more better armoured vehicles, only for the insurgents to deploy even more lethal weapons and tactics. But the greater possible risk is that, as they are encased in ever-thicker layers of armour, the troops become even more insulated from the populations they are policing. They then lose the battle for "hearts and minds" that is at the heart of any counter-insurgency effort. 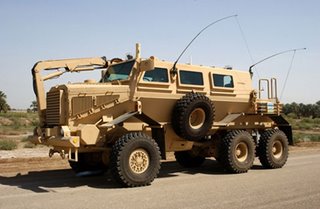 Taking a more holistic view of the problems presented by the complex counterinsurgency challenges of Iraq, the US has come to realise that there must be a multi-layered response. At the high end, this includes the use of unmanned aerial vehicles to patrol the roads and detect suspicious activity, to heavily armoured "minesweepers" such as the Buffalo, which can investigate roadside packages, and artillery radar to pinpoint hit-and-run mortar attacks.

At the low end, there are all manner of activities, from foot patrols, liaison and goodwill visits, training missions and what is known collectively as "humint" – human intelligence - the use of informers and the local population to provide detail on terrorist activities and their whereabouts.

It is here, in the absence of much of the "high-end" equipment that the Americans enjoy. that the British are supposed to excel, with their "soft hat" patrols and their rapport with the local population. But, as we know, the situation has gone belly-up in Basra. It is best described as "tense" leaving our troops ill-equipped to deal with the hostilities.

Here, though, it is not just a question of our troops being provided with inadequate equipment – or none at all. For instance, the MoD has drastically reduced its expenditure on language training so that most troops about to embark receive only a two-hour language "familiarisation" lecture. What price "hearts and minds" when you cannot speak to people in their own language and have to rely entirely on translators?

If our government wants the Army to do a job, then it must provide it with the right equipment and ensure that troops have the right skills and capabilities – and are present in numbers sufficient for them to be able to fulfil their tasks. And therein lie those central questions. What do we actually want our troops to achieve? What equipment and skills do they need to perform? And are we prepared to pay what it takes, both in blood and wealth?

These are important questions. Mr Pocock touched on one aspect of them but the media does not seem interested in expanding on them or adding to them. Instead, we get told about the "mum" factor, while the media retreats into banalities and trivialities. But, if we really are becoming a nation of "mummy's boys", should we be there at all? Should we have an Army at all, or would we be better off joining with the "soft power" Europeans, and let some real men (and women) do what is needed?