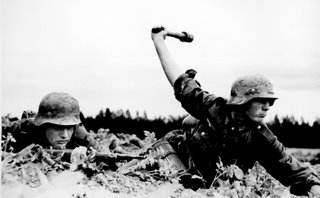 h anniversary of what turned out to be the turning point of the Second World War: the German invasion of the Soviet Union, carried out despite the vows of eternal friendship of the 1939 Molotov – Ribbentrop Pact. It was the start of that monumental battle between the two most monstrous regimes of European history.

Curiously enough, Stalin, who had never trusted anybody in his political career (and probably not before that, either) seems to have trusted Hitler. There are numerous accounts of his refusal to believe the news of the Nazi attack as it was being brought to him. He had, previously, refused to believe warnings sent to him by the British government and his own agents in the West that Hitler was planning an attack and probably in June.

There are various accounts of what happened immediately in the Soviet government and the top echelons of the party but, it seems, that panic set in and there was an immediate decampment from Moscow. Stalin’s greatest fear, shown in his refusal to set up a home guard as the capital itself became endangered during the autumn, was that people might turn against him.

This was not completely wrong. The people of Russia and other states of the Soviet Union are no less patriotic than anyone else but they had suffered considerably more from their own government than others. The propaganda picture of the people of Riga welcoming German invaders does not tell a complete lie. 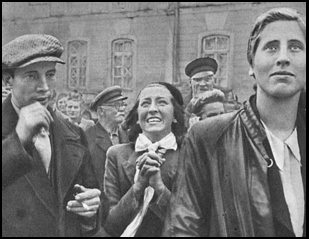 The German troops were welcomed at first in the Baltic states, in Byelorussia (now Belarus), in the Ukraine and even Russia itself.

We have to remember that it is not accurate to say that Germany invaded Russia in June 1941. They did not get to Russia itself for a number of weeks, despite the fact that the troops rolled forward unchecked, the air force had been destroyed and the trains that ought to have been bringing troops to the west were fully occupied carrying prisoners from the newly conquered countries to the east.

When the German troops crossed the border they were crossing from western to eastern Poland, both of which had been devastated by the two separate invaders. They then moved into the Baltic states who had lost around a third of their population into the Soviet gulags, moved on the Byelorussia and the Ukraine, both of which had suffered unspeakably from collectivization and the purges of the late thirties.

The Germans were seen as liberators and their drive to round up and murder the Jewish population was not always unpopular. Though many people, as in other countries, tried to help their Jewish neighbours and friends, many others saw the destruction of the Jewry as a just punishment for the fact that the Communist power, as they thought, had been imposed largely by Jews. Alas, there are too many people in that part of the world who still think that way.

While many in the higher echelons of the German army felt that they should capitalize on these feelings, disband the collective farms and install autonomous local governments, the Nazi ideology prevailed. The Slavs were also described as untermensch and treated accordingly. The horrors of the Nazi occupation of large chunks of the Soviet Union have been described by many.

Stalin’s own reaction was interesting. He first broadcast to the people on July 4. My mother, who was a teenager in Moscow at the time, has told me that his appeal to “brothers and sisters” caused panic. Things were far worse, the Russians reasoned, than anyone had told them if the old tyrant saw them as his brothers and sisters.

This is not the place to describe the subsequent developments of the war on the eastern front but a few aspects might be recalled, as we are often told that the EU is a direct and necessary reaction to the evil nationalism of, well, somebody called the Nazis.

We need to remember Stalin’s refusal to sign the Geneva convention and refusing to see Soviet PoWs as nothing more than traitors. All offers to help them by the Red Cross and the British government were refused. The severe maltreatment by the Germans of the Soviet prisoners cannot be excused but neither can Stalin’s own refusal to help.

We need to remember the lines of Smersh (Smert’ Shpionam – Death to Spies) machine gunners who stood behind the Soviet troops, mowing down those who tried to retreat from the German onslaught.

And we must recall that it was Stalin’s appeal to pure patriotism that made the Russians and many others fight on against all odds and through unimaginable losses until the victory of 1945.

We must also recall the nationalism of many other countries who fought the Nazis and its suppression by the Soviet “liberators”. The story of the doomed Warsaw uprising is just one of several one could recite.

Another 40 years elapsed before the second tyranny was overthrown.