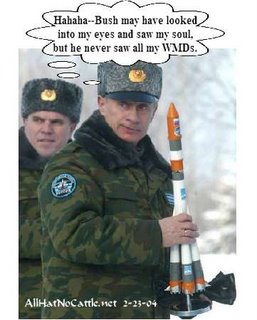 The gist of it is that the American government and its successors are facing a more assertive Russia in the world. Her assertiveness is based on her enormous resources of oil and gas, something that has given Russia an economic renaissance and put her among other global powers as an equal. Or so says President Putin, using yesterday’s speech as a warning to Secretary of State Rice, who arrives in Moscow today

“hoping to win Russia’s support on key international issues such as curbing Iran’s nuclear ambitions, even as the Bush administration has stepped up criticism of Mr Putin’s policies both at home and toward Russia’s nearest neighbors.”

Interestingly enough last month President Putin gave a completely different picture of the situation in his much-discussed state of the nation address. Then he emphasised the difficulties Russia was facing in relying solely on export of raw material as its economic base.

His other theme was then the country’s low birth rate and short life expectancy. Economically and militarily (with emphasis on the second) this was a potentially catastrophic combination. At the time he came up with a purely Soviet idea of rewarding mothers who have many (or, at least, more than one) children. There was little talk of raising life expectancy. Even if people do not die in their fifties and early sixties they would not be much use as soldiers.

It is, as ever, hard to work out what Putin really wants to say. On the one hand, it is true that

“[t]hey [the Russians] are certainly feeling better about themselves than at any time since the breakup of the Soviet Union”,

as one administration official told the newspaper.

On the other hand, it does not take too many brains to work out that a major economy and global power cannot survive on oil and gas money alone. Having rattled a sabre or two against its nearest neighbours, the Russian government has changed its approach slightly, sending out Gazprom to buy up aggressively western companies.

Rosneft wants to float part of its possessions in London, an act that would be contrary to international agreements, say the remaining spokespeople for Yukos, since these possessions include the dubiously acquired property of the latter.

Even the question of Iran is slightly difficult. Russia has maintained very good relations with the Mullahs, put every possible obstacle in the way of American and European attempts to control the nuclear programme and has supplied the country with arms.

One does wonder whether this has been well thought through. Of course, selling arms brings in money but what will end up with Hezbollah and how much of that will be passed on to the Islamist groups Russia is fighting in Central Asia?

In the end it is back to gas and oil supplies. A quarter of all Europe’s gas comes from Russia and there is a push to become a major supplier to China, who is beginning to run into difficulties with its rather rapacious African policy, and the US.

In the meantime, there remains the question of Putin’s successor (if there is one in the near future) and several names of more or less known personalities have been advanced. All are waiting for the man’s own imprimatur. Will he do a Yeltsin and effectively nominate his successor?

Whatever America’s negotiations may come to, other countries, better aware of the dangers of Russian dominance, are beginning to stir.

Yesterday’s Wall Street Journal Europe carried a short item, entitled: “EU supports Caspian Sea pipeline project”. This was a not uncommon muddle in the mind of the journalist. It was not the EU the article was about but a number of European and other countries.

Energy ministers from Austria, Hungary, Romania, Bulgaria and Turkey have signed a declaration in Vienna for the Nabucco project, a privately funded pipeline that will carry natural gas from the Caspian Sea region to European countries. Please note that, despite the newspaper’s take and statements by the Commission, it is separate countries, only two of whom are EU members, who have signed the agreement.

The participants are Austria’s OMV AG, Hungary’s MOL, Turkey’s Botas, Bulgaria’s Bulgargas and Romania’s Transgaz SA Medias. The energy ministers who signed the declaration made it clear that their governments would push the project forward.

“The 3,400-kilometer pipeline, costing $5.8 billion, would supply Europe with gas from countries such as Azerbaijan and Iran, giving them direct access to the European gas market. It could also hook up with pipelines from other parts of the Middle East and with further projected pipelines across the Caspian Sea from Azerbaijan to Kazakhstan and Turkmenistan. That would reduce Gazprom’s control over the gas trade between Central Asia and Europe, because all gas piped to Europe from Kazakhstan and Turkmenistan currently has to pass through Gazprom’s pipelines.”

We can fully expect Russia to exhaust its supply of monkey wrenches, trying to derail the project.