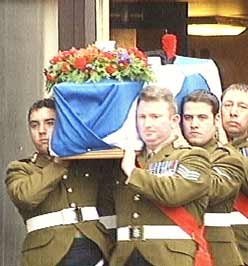 I don't know much about Mr Michael Witheridge, other than he lives in Hayle, Cornwall, but his letter to The Daily Telegraph today is spot on.

The subject is army equipment in Iraq, picking up on the letter we spotted from Mr Martyn Pocock, who complained about our troops being equipped with inadequately armoured "Snatch" Land Rovers.

Witheridge picks up the theme, stating that Pocock is "fully justified in feeling despair and outrage" at the failure of the government to provide adequate armour for our troops in Iraq. He adds that which we already know, that vehicles such as the armoured Land Rover offer wholly inadequate protection against the improvised explosive devices in use there, and again restates the sad truth that soldiers are dying as a result.

Opening out the argument, Witheridge then writes:

What defies belief is the imbalance to be found in the MoD's current equipment procurement programmes. The Royal Navy has recently received into service new ships. In the pipeline are two aircraft carriers, new destroyers and new submarines. The RAF has ordered a huge number of Eurofighters, the cost of just one of which is £80 million.

Any such amount could purchase very large numbers of adequately armoured vehicles. Is it not high time that the MoD's equipment priorities were re-examined and emphasis placed where it is needed in order to save lives?

This goes almost to the heart of the matter, but not quite. Procurement programmes reflect defence priorities which, as we never tire of stating, reflect foreign policy which, in turn reflects – or should reflect – the national interest.

And, in this context, the current equipment programme, which includes a projected £14 billion on the Future Rapid Effects System (FRES), is dictated by the determination of the government to restructure our military as an expeditionary force, meshing with the European Rapid Reaction Force, of which it will be an integral part – reflecting the foreign policy objective of promoting further European defence integration.

The practical result of this is that the scale of equipment – including the two carriers – is not that required to maintain long-term counter-insurgency operations of the type being conducted in Iraq. But, such are the spending priorities that the Army is being robbed of cash for its current role, to pay for a future capability which, even if provided, is largely useless for the roles (in both Iraq and Afghanistan) for which it is currently tasked.

Yet, in so far as we are able to project, the more likely role of the Army – for the foreseeable future – is precisely the type of sustained counter-insurgency role that it is at present undertaking, which present equipment, force structures, training and logistic issues which are almost entirely at odds with the demands of sustaining a rapid reaction force.

Since, as Mr Witheridge points out, the effect of getting the decisions wrong is that troops have died – and will continue to die – entirely unnecessarily, it has never been more vital that there should be an open and intelligent debate on where we are going. This we must have if we are to adopt a procurement policy which reflects actual need rather than the vainglorious ambitions of closet Europhiles in the Defence and Foreign ministries.

Yet, as demonstrated by the two letters we have reviewed, such debate as there is has been conducted not in the main pages of the newspapers – which are distressingly focused on the "Boys Own" aspects of operations - rather than the cold, hard political realities.

Equally, we have to say, in sorrow as much as in anger, the parliamentary activity has been lack-lustre and ill-focused, which leaves the military (and public) interest largely unrepresented.

Either way, this lack of debate is simply not good enough. It is all very well the media baying for blood when military disasters do happen, but many of these result directly or indirectly from decisions made years earlier. Thus, if we are to prevent the preventable, then the time to be discussing the issues is now, when decisions are being made and can be unmade or adjusted.

That the media have instead retreated largely into trivia and irrelevancies is perhaps the greatest indictment of them all, representing a complete abrogation of its responsibility as the "fourth estate". It is not, therefore, an exaggeration to declare that, in the days and years to come, and more troops die through the wanton neglect and incompetence of our government, part of the responsibility will rest with the media – the dog that didn't bark.