All so very plausible 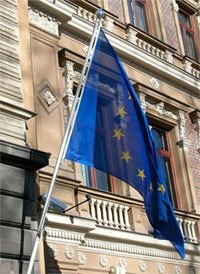 In a move that has been slated as a backdoor attempt to introduce an EU diplomatic service, the EU commission in Brussels yesterday announced that it had adopted proposals for "Common Visa Application Centres" and introduction of biometrics in the Visa Information System (VIS).

The objective, of course, is nothing at all to do with furthering European political integration, but is simply the benign, caring commission aiming to "reinforce internal security and facilitate legitimate travelling to EU".

Yet, these "Common Visa Application Centres" are just one step short of EU embassies – which have been blocked with the demise of the EU constitution – and represent an inspired move to circumvent the blockage. Represented as simply "co-operation" by member states – which enables existing treaty provisions to be used - what is being proposed is that all member states should move their visa offices in each of the third countries into a single office, effectively creating EU consulates in all but name.

EU commission vice-president Franco Frattini, as you might expect, glides over this happy outcome, telling all the happy people that this will:

...facilitate the visa issuing procedure, prevent visa shopping, facilitate checks at external borders and strength the fight against fraud and, within the territory of the Member States, assist in the identification and return of illegal immigrants and the prevention of threats to the internal security of the Member States.

Glowing with pride, he also tells us that:

Common Application Centres" will have the advantage of reinforcing and streamlining local consular cooperation between Member States as resources can be pooled and shared, which will be of benefit to both states and visa applicants. One central access point will even ensure that the data protection requirements, to which I attach the greatest importance, are more easily met.

This follows from an adaptation of the "Common Consular Instructions" (CCI) to "the use of biometrics in the area of visa policy" which will "create the legal obligation to collect fingerprints from visa applicants." And, says the kindly vice-president,

In order to avoid all Member States having to install the necessary equipment for enrolling biometric identifiers in every consular office, the idea of creating "Common application Centres" was born. This is the reason for dealing, in the second part of the proposal, with the organisation of Member States' consular services.

Needless to say, the EU is not usurping the powers of the member states – oh no! It is just being helpful, offering the opportunity to use common facilities. "In all cases," says the commission, "the treatment and the decision on the application is taken by the Member State responsible." So there you are then, nothing at all to worry your pretty little heads about, especially as the details will be discussed in-depth with the EU parliament and the member states.

This is all in the interests of efficiency and cost savings, aimed at being cuddly and fluffy to visa applicants. Where could be the harm in that?