A prophet without honour 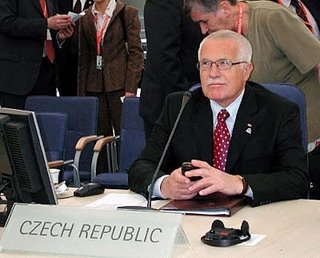 It is not every day that we have a book launched by a Head of State but, while this blogger was toiling over a hot keyboard this week, my partner in crime, Christopher Booker was over in Prague, receiving accolades from none other than the President of the Czech Republic, Vaclav Klaus, at a seminar to launch the Czech language edition of The Great Deception: Can The European Union Survive?

As Booker records in his Sunday Telegraph column this week, this is our 600-page history of "the European project" which we published last year, and it was entirely thanks to President Klaus that it has now been translated into Czech.

Strangely enough, yesterday, Booker was on the platform at the UK Independence Party South East Rally in Marsham Street, London, alongside the one man who had done most to sabotage the creation of the book, UKIP MEP and putative party leader, Nigel Farage. He has since not only ignored the book but done his best to prevent it being publicised to the rank and file of his party membership.

This is the man who, incidentally, also worked to sabotage my selection as the lead MEP candidate for the Yorkshire Region at the last Euro-elections, putting in his drinking mate, Godfrey Bloom as an alternate, and then actively colluded in preventing a disciplinary enquiry being held into the gross breaches of the party rules which led to Bloom being selected. That (in)action left me no alternative but to resign from UKIP. Farage’s response then was to have me fired from my post as research director for the EDD group, leaving it to the group administrator to break the news, he not even having the balls to tell me personally what he had done.

Despite that, the book has done tolerably well and, as our readers will be only too aware, the work of publishing Eurosceptic tracts has continued, the most recent being my CPS publication The Wrong Side of the Hill, warning of the steady, secretive march of European defence integration, a pamphlet that took a prodigious amount of study and research.

It was that which led, indirectly to my publication in The Business last week of my long article on further moves towards defence integration, on the back of the EU’s procurement agreement.

This is an issue, the dangers of which very few people have fully understood, one of which is definitely Geoffrey van Orden, Conservative defence spokesman in the EU parliament, who featured in my article.

You can imagine my surprise, therefore, at the letter in this week’s edition of The Business from Gerard Batten MEP, the man who laughably calls himself the UKIP spokesman on security and defence, attacking van Orden. Amazingly, Batten also claims that his colleague, ex logistics officer Godfrey Bloom MEP, made the same points (as made in my article) to the National Defence University in Washington last November. Such points as were made, however – by someone who would have difficulty putting his underpants on the right way round unless they had labels "front" and "back" on them – were in fact cribbed from an advance copy of "The Wrong Side of the Hill", delivered, as you might expect, without a trace of attribution.

To suggest, therefore, that UKIP MEPs even know the time of day when it comes to the issue of defence integration is a travesty. Batten himself has to crib from my work whenever he offers an opinion on a subject about which he is otherwise noticeably silent.

It was precisely that general theme which Booker addressed in his speech yesterday to the UKIPites, building on my concerns that the political parties had become totally obsessed with their own affairs, telling the gathering to, "Do your homework. Put over the facts. Explain all those things about the way we are now governed which the other parties are desperately trying to avoid."

Booker's words are likely to be ignored. The bulk of UKIP members – it seems to me – have very little interest in how the EU works, and are as a result lamentably poor in putting over coherent objections to it. That partly explains why they achieve so little media coverage. Then, that seems to be the case generally with Eurosceptics, reflected in how few of them actually visit this blog. And that is perhaps why, to receive plaudits for our book, Booker had to travel to Prague. What was that about a prophet without honour in his own country?