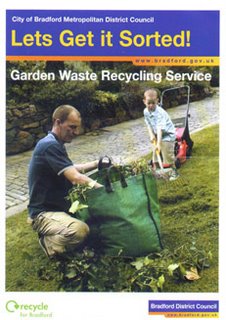 When you actually talk to people, ordinary people, and ask them whether they would rate any public service of which they had personal experience as efficient, their answers are almost invariably in the negative.

Yet these same people – or so we are told by the politicians of all parties – would go to the barricades to defend "their" public services and, so sacred are that it is electoral suicide to touch them.

It is these same lame-brain politicians and their groupies (see the comments section) who go all dewy-eyed about municipal recycling schemes and it is thus timely that we get a piece in The Telegraph today telling us about the "composting" rip-off.

Hundreds of thousands of tons of garden waste, we learn, are being driven around the streets unnecessarily every year because councils have an incentive to collect it rather than promote home composting. The growth of "free" green waste collections has caused extra public expenditure, pollution, congestion and probably accidents and been in direct contravention of the government's policy of favouring the minimisation of waste.

Interestingly, that dim little creature masquerading as leader of the Conservative Party was preening during the local election campaign about how Conservative councils had the best record for "recycling". But, as it turns out, the "unintended consequences" of the way that the government promotes recycling means that some of the country's highest-scoring local authorities - such as Tory-held Bury St Edmunds in Suffolk, achieve their high figures by gathering green waste that it might have been more environmentally friendly not to collect at all.

The problem, we are told, arises from the government giving statutory incentives to recycle the highest possible tonnages, and garden waste collected for recycling gets subtracted at a rate of 100 percent from the amount of biodegradable waste a local authority is allowed to landfill. On the other hand, any waste that it has managed to save by handing out free home composters, for example, is credited at only 68 percent under the present system – "forcing" councils to go for collection.

The result is a huge growth in "free" (the inverted commas are mine – they aren't bloody well free!) kerbside collections that "has mobilised large quantities of waste, a large proportion of which could otherwise have remained outside municipal collection systems and quietly broken down at the end of people's gardens." Kerbside green waste collections have thus become the fastest growing form of council recycling, growing to 400,000 tons in 2005 from about 20,000 tons in 1997.

All this of course is adding massively to councils' costs, hence the calls yesterday for additional refuse collection charges – the final stage of a bureaucratic system gone mad. 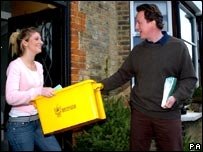 As it happens, our own local council joined in the madness last week, delivering unasked two bijou collection bags (illustrated) to our front door - and then another two to our back - with details of a four-weekly collection cycle which just happens to be different from the four-weekly waste paper collection cycle. It is getting to the stage where we need to keep diary appointments to know what rubbish to put out, and when.

But we are not going to use the bags. We have been composting our garden waste for as long as I can remember and are not about to give the council material that we would prefer to use ourselves, just to help it reach some nominal quota. Nor do we need a "free" composter – why should taxpayers' money go on those?

Anyhow, the real point is that this insane scheme is driven by the EU's landfill directive, not that you would get any hint of this from the Telegraph article. Yet it is about time people woke up to the fact that a previously workable system of waste collection and disposal is being destroyed – at inordinate cost – by mad Brussels bureaucrats.

It is an indictment of the Eurosceptic movement, and especially UKIP, that it has not been able to major on this issue and come up with some saner, workable ideas for promoting recycling. Certainly, though, we cannot look to the Tories. Not only do they not "do" Europe, all we get on this is Peter Ainsworth, the shadow environment spokesman, bleating that "the government urgently needs to address this issue and get people to get rid of their waste in the most sustainable way - and that means in a home composter."

The man has compost for brains.