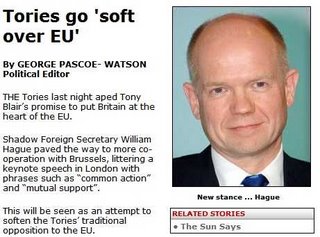 Trust The Sun to go for the jugular. And, when all the prattling is over, the stark fact will remain – the Boy King is adopting the classic ambiguous fudge on "Europe", trying to run with the hare and the hounds.

I listened to Hague on the Today Programme this morning and Naughtie had him skewered on the question of his "reform" agenda, pointing out that it would require the scrapping of the Treaty of Rome. The shadow foreign secretary did not disagree, enabling the BBC website to pronounce, "Mr Hague says he is not ruling out rewriting the Treaty of Rome".

The chances of that happening, of course, are precisely nil. We need not go through the laborious process in detail, but all our readers will be aware that, for a treaty change, there would have to the prolonged process of an intergovernmental conference, with unanimous agreement of a new draft treaty by the leaders of all 25 member states (soon to be 27), followed by unanimous ratification. This, as we all know, is just the process that has prevented the EU constitution being adopted.

Basically, Hague is offering moonshine. Intellectually – if that word can be used in this context – this fantasy comes from the same stable as "in Europe but not ruled by Europe", wishful thinking that bears no realistic prospect of coming about.

As for the detail of Hague's speech, who cares? Fisking it is almost intruding on private grief. The Tory Boy Blog has already made a start, but it cannot improve on The Sun's headline. Effectively, the Boy King has ruled himself out of the game.