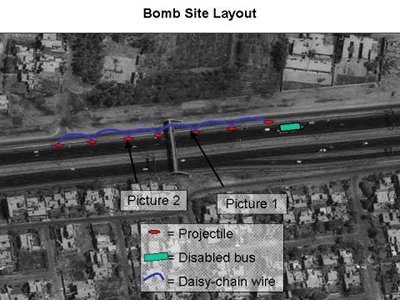 So far this week, we've run an unprecedented five stories on a single topic, the unnecessary deaths of British soldiers from roadside bombs in Iraq, due to the inadequacies of their equipment. We started with this one, with follow-ups here, here, here and here, pointing out that, had the MoD provided our troops with armoured RG-31 patrol vehicles, some of our soldiers, like the more fortunate Americans pictured below, could have survived.

Today, the Sunday Times takes on the issue with an editorial headed: "Pay up and save lives", which we reproduce in full here:

It is of course a hugely sad matter that the toll of British soldiers killed in Iraq has been growing steadily to reach its current total of 113. Every military death is a blow for the country and a tragedy for the family and friends of those who fall victim. So it is reasonable to assume that the Ministry of Defence will do all it can to prevent the deaths or injuries of our troops. including providing them with the best weapons and armour to do such a dangerous job.

Now we learn that British soldiers have been patrolling the streets of Iraq in Land Rovers that offer almost no protection against lethal roadside bombs. Nearly a quarter of British soldiers so far killed in hostile action have been the victims of roadside bombs and were patrolling in these so-called "Snatch" Land Rovers. The vehicles, some up to 20 years old, were shipped to Iraq from Northern Ireland, where they were used to police a very different and much less bloody conflict. Their bodywork and floors offer only thin protection against the improvised explosive devices used by the insurgents. Aware of this, the terrorists have started to target the Land Rovers and the risks of more fatalities are increasing every day.

We would naturally expect the ministry to do something about this. Far from it. The bureaucrats are digging in. It is not as if there is no alternative. The RG-31, an armoured Land Rover built by BAE Systems, is being used by the Americans and the United Nations. Some deaths from roadside bombs can never be prevented but other countries’ soldiers seem better protected.

Complaints about inadequate equipment have dogged the British mission from the start. When Sergeant Steve Roberts was shot two years ago it emerged that the protective vest he should have been wearing was not available. The six military policemen killed by a mob three years ago had antiquated radios and inadequate ammunition. The scandal over Land Rovers not fit for their purpose is just the latest sorry example of Whitehall warriors sending our fighting men badly protected into the field.

This is in a week when the Tory Diary blog has been discussing such vital issues as a new logo for the Conservative Party and an interview between the Boy King and Jonathan Ross.

The contrast perhaps speaks volumes for contemporary politics when even a defence debate in the Commons goes unnoticed by the chattering classes. Fortunately, the Sunday Times did not share the values of the "modern compassionate" Conservatives. In addition to its editorial, it has published the Land Rover story on its front page and also devoted a full-page to a focus analysis. The story cites a certain Richard North, "an author and internet blogger" who has been campaigning over the failure to invest in heavily armoured vehicles. He says:

It was an incredibly crass decision to reject the RG-31 and shows yet again the MoD's knack of creating a disaster of every procurement decision. The looked at whether to stick with cheap, second-hand Land Rovers that were not safe to use in Iraq at that time, or buy a vehicle that would save lives. What did they do? They stuck with the Land Rovers.

The Times story follows in the wake of The Sunday Telegraph, with Christopher Booker continuing the story he started last week. Moreover, this is clearly an issue with which the public clearly empathise, the two lead letters in the Telegraph supporting the calls for better equipment.

That does not, incidentally, stop the Telegraph's dim excuse for a defence correspondent, Sean Rayment, pursuing his own line that "the policy of using Land Rovers" is due to the lack of Warrior MICVs. This, he admits, is a claim the Ministry of Defence denies, a denial that has substance as no knowleageable person will argue that the Warrior is a suitable patrol vehicle. And, at three times the width of the Land Rover, it most certainly cannot gain access to many areas in urban environments.

Nevertheless, for those who want to understand more about the real enemy which is threatening our democracy, this is a good starting point. Clever Dicks and Tory politicians, it seems (with some notable exceptions) need not bother.