The wickedness of the Beeb

For the Pinzgauer "Vector" see here. 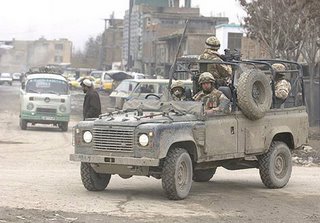 There is no doubt that the "Snatch" Land Rover issue is hotting up, especially with the regrettable deaths of two soldiers in Afghanistan yesterday. The Guardian, in particular, noted:

The soldiers from the Special Boat Service were returning from a night patrol when insurgents hit their armoured "snatch" Land Rover with a rocket-propelled grenade. The soldiers left the vehicle and two died in the ensuing battle. The injuries to the third were described last night as serious but not life-threatening.

It is too early to say whether a better-protected vehicle would have changed the outcome for, as we pointed out yesterday, the RPG 7 is a different order of threat. The anti-mine measures embodied in vehicles like the RG-31 would not necessarily have saved the troops in this particular firefight.

Nevertheless, this did not stop the Guardian noting that the casualties "may stoke the controversy surrounding British troops' use of open-topped Land Rovers, which offer limited protection." The paper cites Captain Gibson who observes that: "It's a balance of protection, mobility and risk … If you drive around in fully armoured vehicles you can't talk to the local population." 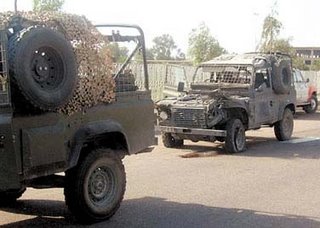 But the Guardian, rather confusing the issue between the open-topped patrol vehicles and the "snatch" versions, goes on to say:

The vehicles have been criticised as a soft target after the roadside bombs which have killed some 18 British soldiers in Iraq. Des Browne, defence secretary, told MPs on Monday that the issue was being reviewed. Defence sources said possible alternatives include the RG-31 mine-protected armoured vehicle made by a BAE Systems subsidiary in South Africa and used by US forces in Iraq.

It seems also that the matter has been raised directly by journalists at one of the daily briefings at No. 10., when the prime minister’s official spokesman said: "Let us be clear that the very sad deaths today were down to those who attacked British troops. We shouldn't make it any more complicated than it is. Our thoughts are with their families."

Enter, therefore, the BBC to put its "impartial" analysis on its website to inform general readers about the issues. Headed, "Q&A: Army Land Rover row," it tells us that:

The use of Snatch Land Rovers by the British Army has become controversial after several high-profile roadside bomb attacks in Iraq. Now a Snatch in Afghanistan has been attacked with a rocket-propelled grenade, leaving two soldiers dead.

What is then remarkable is that the Beeb – usually no friend of the MoD and definitely of an anti-war persuasion - not only trots out the establishment line but adds a few embellishments of its own.

It starts by quoting an MoD spokesman to explain that tanks are often too big and too slow, cumbersome and likely to annoy civilian populations. "You can't exactly go downtown Basra in a battle-tank," says our man helpfully. What he doesn't say though is that the security situation in Basra has deteriorated to the extent that the Snatches are no longer allowed out on their own, so patrols are escorted front and rear by (tracked) Warrior MICVs – a procession that is hardly likely to be much less annoying to the civilian population.

What he might also have mentioned is that the Warrior fleet in Basra and surrounds is doing such high mileage that the vehicles are being worn out very rapidly and the maintenance problems are stacking up. They are being used at an unsustainable rate – for a purpose for which they were never intended – and something soon will have to give.

Nevertheless, the Beeb continues in its role of MoD platform, allowing the spokesman to add, "The Land Rovers are fortified with armour to offer the troops protection against explosions and ballistics … They also have electronic counter-measures (ECMs) - designed to detect roadside bombs before they explode."

Note the use of the word "fortified", which is not the one I would have chosen – "lightly armoured" would be a neutral description. As for "protection against explosions and ballistics", last night we heard it from the horse's mouth when Sky News interviewed a soldier on patrol in Basra. His view, simply put was, "These Land Rovers are no use to anyone".

The ECM is, of course, useful, but only against bombs detonated by radio or mobile 'phone. Against pressure plate activation, command wire detonation or infra-red triggers, it offers no defence. 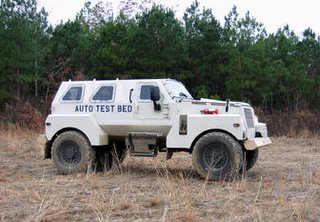 Never let it be said that the BBC does not try though. Posing the question as to why the Land Rovers are "controversial" – not "deadly" mind you – we are told that "a number of incidents in Iraq have thrown the spotlight" on them. We are not told that "number", only that "Insurgents have begun to use roadside bombs against British forces - killing several soldiers", with the Beeb continuing, "Families of dead soldiers have complained that the Land Rovers do not provide enough protection."

Then, putting the best possible gloss on this, the Beeb tells us that "Defence Secretary Des Browne responded by promising to review the use of the vehicles in Iraq," quite forgetting to say that this was only after a serious campaign had started. 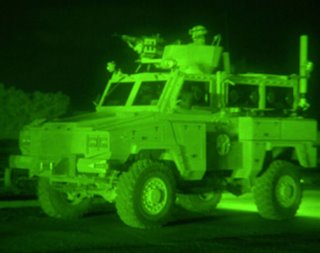 Then we come to the really serious spin. Reviewing the alternatives, we are told that "critics of the Army" say the vehicles are an outdated, cheap alternative to the more modern equipment used by the US and South Africa. No Beeb, we are not criticising the Army. We are criticising the government, and Blair in particular, for sending troops in without adequate protection.

As for the US forces, well, the Beeb says, they use "Humvee vehicles", again forgetting to tell us that they are also introducing RG-31s, Cougars and Buffalos, and are actively looking for a replacement (see above left). No, all we get is, "these (Humvees) come in for similar criticism to the Land Rovers and are thought to be susceptible to roadside bombs and grenades." 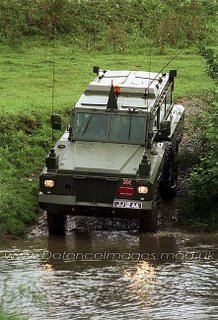 Now we arrive at the meat: "Others have suggested that vehicles used by the South African army - RG31s - should have been bought to replace Land Rovers." Again, there are some key missing facts, like the US is using them in Iraq and the Canadians are using them in Afghanistan – and have just ordered another 25. Instead, we get:

But RG31s are designed to protect against landmines, not the kind of explosives the Army deals with in Iraq. The Army used RG31s in Bosnia, but took them out of commission due to maintenance problems.

This, of course, we have rebutted thoroughly on this blog, here and here, but the lie is now in the system and the Beeb is at the forefront of perpetuating it.

And, to conclude this "impartial" analysis, Lord Drayson, the procurement minister, is given the last quote: The "size and profile" of the RG31s did not match the Army's requirements, and they could not access urban areas the Land Rovers could. We are then left with this:

Other armoured vehicles that the Army already uses, such as the Warrior, have been suggested. But these are much bigger and less mobile than the Snatch Land Rover. The MoD has argued that their Land Rovers have enough counter-measures to make them safe for peacekeeping patrols. They say that the equipment they use is under constant review, along with the tactics and electronic counter-measures. 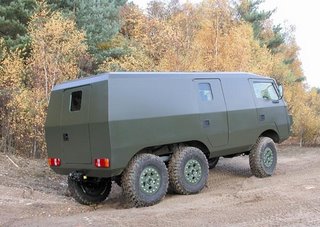 So, everything is fine with the world of the BBC and MoD. Except, we learn from Monday's defence questions, after an intervention from Conservative MP Mark Pritchard, the government has "agreed to supplement Snatch with a new patrol vehicle, Vector, which will come into service in 2007."

The "Vector", it turns out, is the Armoured Pinzgauer, which we have already dubbed coffins on wheels. The thing has already had a glowing review from the Sunday Telegraph's Sean Rayment and is now attracting its defenders on the unofficial Army forum.

The odd thing is that the 80 armoured vehicles, at a cost of £35 million, were supposed to be going to Afghanistan, yet the question Pritchard posed was in relation to Iraq. Are we on the verge of a fudge here, with the MoD diverting these dangerous vehicles to Iraq as a public relations measure?

No doubt, if this happens, the Beeb will be on the case, and first in line with criticism when soldiers are slaughtered, despite having done nothing to prevent it. That is the wickedness of the BBC.

See also this update on the Pinzgauer