It is difficult to follow events in Comoros and there is no particular surprise that the Times labels its time chart as: Comoros chaos. The tiny country has been independent for 30 years and during that time it has had 19 coups or attempted coups (though it is frequently hard to know the difference). 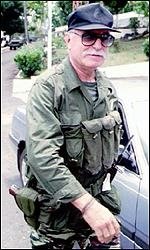 Colonel Bob Denard, a French mercenary whose real name is Gilbert Bourgeaud, who gained a fearsome reputation in the sixties and seventies in Belgian Congo, North Yemen, Biafra and Angola, was involved in four of the most significant ones. (Give the man his due: nothing if not persistent.)

Colonel Denard is now 77 and has Alzheimer’s. He and 26 other mercenaries were on trial in France for their role in the coup of 1995 (there was at least one other since then, possibly more).

According to the Times:

“Denard led 30 mercenaries who landed on the Indian Ocean islands in rubber dinghies on September 27, 1995, and captured M Djohar in his palace.

A week later M Chirac sent a 600-man force that put down the putsch but did not restore M Djohar to power.”

Indeed not, as it seems M Chirac was well aware of the coup that was going to happen and, according to the court’s ruling:

““It is clear that the French secret services knew of the plan for a coup d’état conceived by Robert Denard, both its preparation and execution,” the court said.

“It is also evident that at the very least they did nothing to hinder it and that they therefore allowed it to reach its conclusion. As a consequence, that means political leaders must also have wanted it.””

The plotters were given suspended sentences because of the decision that they were acting, if not under the orders, at least with the full cognizance of some parts of the French government. It is unlikely that l’escroc Chirac will ever be tried for his part in this or any other coup in Africa.

Many discussions go on about the best way of helping Africa and its unfortunate population. As our readers know, this blog believes that the handing out of aid to corrupt and bloodthirsty kleptocracies, as advocated by numerous NGOs and rock stars, is not only not the solution; it is actually a very big part of the problem.

There is another part of the problem and the solution to that seems as far away as ever: it is the activity of the French government and security services. Until they are somehow neutralized, many parts of Africa will remain subject to continuous violent upheavals.