Shape up or get out 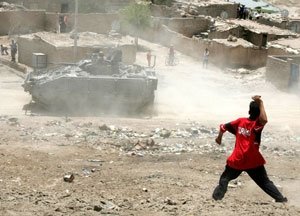 I think we've got past the stage where we believe that bloggers are going to replace the MSM, much less conquer the universe, and are settling down to the idea that we cater for a small niche market, with our own brand of specialist comment and occasional exclusive news item.

By and large though, our relationship with the media is one of synergy. We feed off them and they off us. In the former case our role – we believe – is to add value, providing insight and context to often one-dimensional pieces.

With that in mind, we must congratulate The Times for its excellent on-the-spot reportage of the situation in Basra, especially after its abysmal performance on the Haditha photograph.

Written by Ned Parker, under the heading, "Daily attacks and abuse - the new reality for British troops", it chronicles the experience of The Times correspondent on patrol with members of Delta company in Basra, who spend their time "dodging the taunts and the missiles".

The graphic account – which gels with other reports we have seen on the situation - strongly suggests that the British Army has long ceased to make any effective contribution to the policing of the city. In fact, in the sullen and rebellious mood prevailing, our troops themselves seem highly vulnerable targets, with insufficient numbers and resources even to protect themselves adequately, much less the population.

Parker cites Major Rob Yuill, who tells him, "It's ... drifting toward a situation like Bosnia," comparing the targeting of Basra's Sunni minority to the fierce ethnic conflict of the Balkans in the early 1990s. Sergeant Lans Downe adds to this, saying, "We're stuck in the middle… We're trying to assist the Iraqi police and Army, but we get caught up in it."

We are reminded that nine British soldiers were killed in 50 attacks in May and, writes, Parker, every time the men of Sergeant Downe's Delta company go out in their Warrior carriers (as pictured above), they are tailed by cars or watch men on cell phones marking their movements and passing the information to someone farther down the road.

"You are constantly being watched. They put a name on where you are and what you are doing," says Downe. "Every time you are out (the danger) is a constant. One moment civilians will ask you for water. The next they bomb you ... It's worse than it was in Northern Ireland."

Yet, in a city of 1.5 million, there are only about 700 British troops available for active patrols, with a local police force that, according to Major Yuill, has only "a small minority" of good cops.

That the number is insufficient is made clear by Parker's piece, who records that the men in Delta company "admit that they do not have the eyes and ears to rein in the death squads and gangs that have caused Basra's murder rate to skyrocket". Citing Downe again, Parker writes, "A lot of it happens behind the scenes. There are a lot of side streets. It happens in the shadows, in the places we don't know about."

Without in any way encroaching on the debate as to whether British troops should have been sent to Iraq, or questioning whether in principle, they should remain, it is germane to note that, in Northern Ireland, at the peak of the troubles, there were over 22,000 British troops engaged in security operations – in addition to the civilian police. 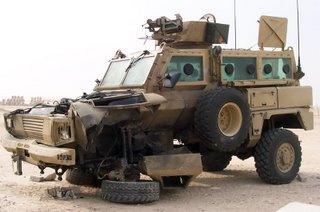 Clearly, our forces in Basra cannot do any sensible job and, as we noted in an earlier post, there is very serious concern about whether they are being supplied with the right kit. When it comes to the "Snatch" Land Rovers, for instance, in "high risk" environments, the US are now using the RG31 (pictured) produced by a wholly owned South African subsidiary of BAE Systems.

From this vehicle, damaged when it drove over an improvised bomb,its five occupants emerged with only minor injuries. Had they been in a Land Rover, they would surely have been killed. How ironic it is - or perhaps scandalous would be a better word - that US troops should be protected by equipment made by a British-owned company, yet our own forces are deprived of it.

Therefore, we (and I have discussed this at length will my co-editor) feel it is right to question why our troops are in Iraq under the current circumstances. If they are to be there, they should be in sufficient numbers to be able to do the job, with the appropriate equipment, necessary to protect them and complete their tasks. They should also have the very clearest of instructions as to what they are supposed to be achieving and full political support in the execution of those instructions.