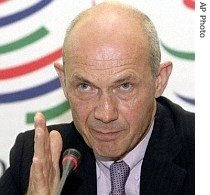 Looked over the edge of the trench to see what is going on in the wider world and read this:

The squabbling began even before the talks did. The world's most powerful trading nations gathering Thursday to hammer out a long-delayed global trade treaty spent most of the first day finger-pointing - leaving little apparent hope of a breakthrough when official talks begin Friday.

"Somehow the gaps don't seem to diminish," Brazilian Foreign Minister Celso Amorim said of the differences that have put the Doha round of trade talks two years behind schedule. "If anything, if I look backwards, maybe to two or three months ago ... I have the impression that the gaps have widened, or at least become more rigid," Amorim told reporters after a meeting of the G-20 group of developing nations.

Ahah! It’s WTO time again. Wake me up when it's all over and the talks have failed – I'm going to bed.

Some cracking stories in the morning for you, including a long one from my co-editor.