Mind how you go 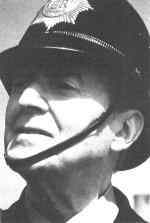 What would Sergeant Dixon (originally of Paddington Green but killed there in “The Blue Lamp” and resurrected for the Dock Green nick) have said about this report?

The Press Association tells us [not, apparently, on line] of a curious conclusion a new report by Her Majesty’s Inspector of Constabulary (HMIC) has come to. Looking at vetting procedures in police forces in England and Wales, the report has found 40 loopholes, which means that, in effect, those vetting procedures are worth very little.

Smaller police forces, it is said, are finding the whole process particularly difficult, time-consuming and expensive. They are sternly enjoined to put national procedures into place by next April at the latest. Presumably, this is another step towards those mergers, so dear to the heart of our politicians and civil servants.

Actually, it seems a little pointless to put national procedures into place if there are these 40 major loopholes. The most interesting ones relate to EU nationals who might want to work in the British police force. I wouldn’t have thought that is a terribly good idea at the best of times but even less so because it is impossible to carry out proper checks in a number of countries.

“In effect, current policy means that forces can reject a United Kingdom applicant with a caution from three years and a day ago, but they can accept a war criminal from a country where checks are not possible.”

That seems a little over the top. One can hardly envisage WWII war criminals still being spry enough to get into our police, unfit though many of its members are. On the other hand, of course, there are the French officers who are serving in Côte d’Ivoire or with the UN in DR Congo.

There are the former secret police officers from the Baltic and other former Communist states. Not necessarily war criminals (how their minds do run on that category) but frequently guilty of humanitarian crimes.

The real problem is considerably less dramatic. A number of the EU member states have inadequate central criminal records and it is next to impossible to find out whether a certain applicant has a record or not.

It would, one presumes, be possible to decide that anyone whose record cannot be proved to be pristine is not allowed to become a police officer, police staff or “non-police personnel with access to police premises”. Police forces do not come under Single Market rules and the usual crime of discrimination need not apply.

Failing that, we should, at the very least, have clear rules, on the basis of the precautionary principle, about not taking any present or former French or Italian politician.