The jury is still out 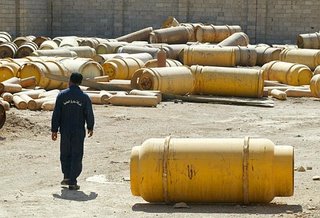 There is a Russian saying that amounts to “I am selling this for the price I bought it”. This is a little stronger than “take it or leave it”, which indicates indifference. There is more of an understanding that it is hard to decide what to think of a story. This is one such story.

It is to do with those famous WMDs that “everybody knows” did not ever exist in Iraq; could not have existed; and were never going to exist. By “everybody” I mean people who know little on the subject but like to push a certain political line. In America they call it Bush Derangement Syndrome. Speaking as somebody who has disliked Tony Blair and his government since the first moment, I have also diagnosed a Blair Derangement Syndrome.

People, who actually know something about the subject, on the other hand, tend to be cautious and discoursive. At least one expert I heard, said quite frankly that on the basis of all the information that was coming out of Iraq he had firmly believed (as did just about everybody else who had been to the country and/or read all the reports) that Saddam had WMDs.

Several years on, the expert still does not know what really happened. Was everybody (including the UN inspectors, Hans Blix, who seems to be suffering from a memory lapse, and the sainted Dr David Kelly) fooled or did the WMDs disappear from the country in those months, while the invasion was being prepared and the interminable UN resolutions were being debated?

A few months ago a piece appeared on Newsmax.com that appeared to give a partial reply. Former Deputy Defence Secretary John A. Shaw was speaking at an “Intelligence Summit” in Virginia and said:

“The short answer to the question of where the WMD Saddam bought from the Russians went was that they went to Syria and Lebanon. They were moved by Russian Spetsnaz (special forces) units out of uniform, that were specifically sent to Iraq to move the weaponry and eradicate any evidence of its existence.”

This reminded me of a curious episode that took place soon after the invasion had begun. American troops, it was reported, tried to stop a Russian convoy of armoured cars that were racing towards the border. They had, it appeared, opened fire but failed to stop the convoy. One would have expected the Russians to express anger, outrage, at the very least, dissatisfaction and a demand for an apology.

Not so, but far from it. Before the Americans could make an explanatory statement the Russians announced that they were not a bit upset; it was clearly a mistake; these things happen; boys will be boys and other suchlike platitudes. Along with many other people I immediately started wondering what or, possibly, who was in those cars.

Of course, none of it is proof, though Mr Shaw, in his presentation, seems to have given a certain amount of circumstantial evidence, including this:

“The Ukrainians were eager to provide the United States with documents from their own archives on Soviet arms transfers to Iraq and on ongoing Russian assistance to Saddam, to thank America for its help in securing Ukraine's independence from the Soviet Union, Shaw said.”

The story of Russians assisting the removal of weapons from Iraq and some of them surfacing in Syria has reappeared more and more frequently, especially since the slow process of the translation of the captured Iraqi documents has actually begun(unnoted, largely, by the British media).

A few days ago it surfaced again in FrontPage magazine, not always the most reliable of sources. In this case, Jamie Glazov was merely reporting a symposium on “Iraq, WMDs and troubling revelations”.

“Just recently, Saddam Hussein's former southern regional commander, Gen. Al-Tikriti, gave the first videotaped testimony confirming that Iraq had WMDs up to the American invasion in 2003 and that Russia helped remove them prior to the war. His testimony confirms numerous other sources that have pointed to Russia's secret alliance with Iraq and the co-ordinated moving of WMDs…”