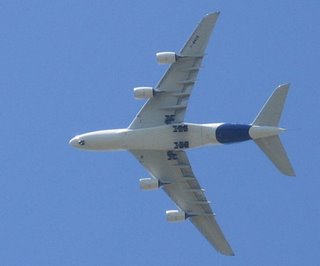 One should not really take such pleasure in the travails of Airbus – British jobs are at stake here – but so closely linked has been the fortunes of this company with that of the European Union itself that one cannot help but enjoy a certain grim satisfaction when hubris tilts slowly into nemesis.

We now learn from Reuters that the company has announced new delays of at least six months in deliveries of the A380 superjumbo on Tuesday, a development described as "an embarrassing new setback expected to blow a two billion euro cash hole in parent EADS".

Airbus is still planning to deliver the first aircraft to its launch customer, Singapore Airlines, in 2006, but is then having to slow down deliveries the following year because, it says, of problems with the installation of electrical wiring harnesses.

EADS is predicting that the delays will mean shortfalls in earnings, before interest and tax, of €500 million a year between 2007 and 2010, and acknowledged it would have to pay penalties to carriers which have signed up for the world's biggest airliner.

This is the second major revision in the production timetable, coming as it does on the back of an earlier six-month delay, despite earlier assurances that the programme was running to schedule. In true European fashion, the company's forecasts are turning out to be about as accurate as those of the EU commission.

Still to come is the decision on whether to invest in the revamp of the A340 and A350 series and, somewhere in the wings is the military airlifter project, the A400M, which is attracting a remarkable lack of headlines that bodes ill for the health of that little venture.

The delays on the A380, therefore, could not come at a worse time as EADS is looking down the nose at a major cash shortfall just at the time when the demands on its funds are at their highest, on top of which it is having to stump up for the BAE shares and extending its reach into the military market. It must not be forgotten, also, that EADS is a major funding partner in Galileo, which explains its reluctance there to bail out that project.

Meanwhile, Airbus's customers, including its largest, Emirates, which has ordered 43 A380s, are "considering their position", and the possibility of some bailing out has not been discounted. Would that we could do the same with the European Union which once so proudly took ownership of the project, that other lame-duck "superjumbo".