Gone over to the enemy 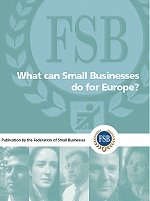 In the Eurosceptic battle order, it is not uncommon to find the Federation of Small Businesses (FSB) prominently listed in the ranks of the good guys. But the reputation is undeserved. For some years, the organisation has been actively subverted from within by a clique of Europhile luvvies, gradually turning it from a staunch opponent of the EU to one of its cheerleaders.

But so confident is this Europhile clique of its grip on power that it has finally come into the open with the launch, proudly announced on its website, of a new office in Brussels, celebrated by the publication of a report, which makes no concessions at all to the views of most of its members.

Described as "the FSB's blueprint for small firms in the EU", it rejoices under the title, What can Small Businesses do for Europe?, demonstrating clearly the policy shift from one of active opposition to one of willing collaboration.

The report itself makes some good points but, signed by the FSB's rabidly Europhile "EU and international affairs chairman", Tina Sommer, it talks glowingly about "how the small business community can help the EU to overcome five of the biggest challenges we face".

Yet, if this represents the final sell-out of the organisation, it has been a long time coming. I used to write a column for the FSB's magazine, First Voice, and, oddly enough, one of the very first posts on this blog was an article written for the magazine in 2004.

That it was never published speaks volumes for where the organisation was going at that time, especially when it led to my instant dismissal as a columnist – in another of those curious episodes where no one had the balls to tell me and it was left for me to find out when the article did not appear.

With the FSB having gone over to the enemy, however, it is following in a long line of organisations which have been suborned, not least the Church of England, which is an active advocate for the "European" cause. One wonders though, whether the FSB rank-and-file membership, who are notoriously apolitical, will actually notice and, if they do, whether they will protest at the hijack of their organisation.