Another "surprise" from the Court of Auditors 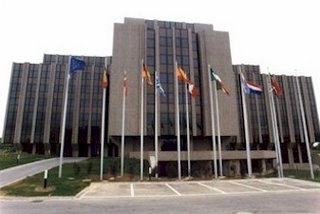 Another month another report from the Court of Auditors, this time about the EU funds going to the members of the next wave of probable EU enlargement: Romania and Bulgaria.

Our readers will recall that the Commission hummed and haed about those two countries and decided that their legal, fiscal and political structures were not precisely of the transparency and honesty that the EU allegedly requires.

As EUObserver sums up:

“Phare funds are channelled by the European Commission to candidate states in order to prepare their administrations for accession, as well as to boost economic competitiveness.But a large part of the cash ends up in a black hole, the court found in an audit, which covers projects initiated from 2000-2004, involving €511 million of Phare cash for Bulgaria and €1.4 billion for Romania.

"At the time of the audit for over half of the investment projects audited the assets were not, or were only partially, being used for the intended purpose," said Mr Engwirda."Outputs and results lagged considerably behind schedule, sometimes by up to two years," he added.

The court said in a statement that it "criticises" the commission for its "overall management of investment projects."”

I wouldn’t call lagging behind schedule in various projects by up to two years particularly unusual or catastrophic. Have these people not heard of Wembley Stadium?

Do they not know that most projects in Communist and post-Communist countries, if funded and supervised by the state in any shape or form, tend to lag by considerably more than that?

There are some entertaining details, also quoted by EUObserver. Some of them, to do with the jeeps favoured by the Bulgarian border patrol will particularly interest my colleague:

“The report lists a number of non-functioning, half-finished and in some cases apparently useless investments, with Mr Engwirda himself highlighting a €3.1 million bridge linking Romania and Moldova completed in December 2004 with no access road on the Moldovan side.

The Moldovan road has meanwhile been finalised, commission officials noted.

The Bulgarian public prosecutor's office was granted a €1.8 million computer system, but 37 work stations were not used but put in a store room instead, while Bulgarian border police are seemingly not very keen to use EU-funded four wheel-drive jeeps."

The usual fleet of the [border police] is a Russian-built car, costing one third of the price of the car delivered under Phare and with cheaper spare parts," said the report.

A Romanian tourism development area was found to contain "an eyesore, an empty, degraded Olympic-size swimming pool," while a newly-built asylum centre was reported to have an occupancy rate of 7.6 percent.”

Of course, one could argue that the objectives of the PHARE Programme as somewhat skewed but that is not the purpose of the Report:

“15. The overall objective of the Phare programme is to help candidate countries prepare for EU-membership. This involves investments with the aim of strengthening:

(b) Economic and Social Cohesion (ESC) through measures similar to those supported in Member States through the Structural Funds, including addressing the effects of restructuring in important sectors of the economy.”

If we were really concerned with the welfare of those two countries (for selfish if no other reasons) we might start by asking ourselves whether “preparing” them for the entirely inappropriate and burdensome acquis communautaire is quite the right way of going about matters. But we are not concerned with anything as silly as that. We are convinced that there is only one way forward for the post-Communist countries in Europe and that is membership of the European Union.

Having decided thus and having allocated quite large amounts of money for the promotion of our ideas, we are faced with our old friend, unaccountability. Neither at the EU nor at the national end is there any kind of supervision of funds. Needless to say, the discipline of the market does not apply.

Every now and then the Court of Auditors produces a report, which, if not precisely ignored, is not taken seriously enough to be acted on.

The Commission does reply each time but each time somebody else is at fault.

“IV. Some of the investment projects audited were indeed not in place or operational at the date of the auditors’ missions. The principal causes of the delays and shortcomings in the implementation and completion of the respective projects were indeed the lack of the necessary administrative capacity of the national authorities on the one hand and on the other hand the delay in making available the required co-financing and other national resources.

However, efforts have been made in order to develop the level of the administrative capacity to ensure effective implementation and completion of the investment projects, within the time limits set in the programming documents.

Equally, continued efforts are being made in order to raise the awareness of all actors involved (national authorities, local authorities) that at the time of programming, further funds and human resources must be earmarked and made available to ensure the proper management and sustainability of the investment projects, after they are completed and put into operation.”

But not fiscal discipline or accountability for the money spent. Other problems are acknowledged but they have all been dealt with according to the Commission response.

“VII.
First indent - The implementation of Phare programmes has been affected by the weakness in the administrative capacity of Romania and Bulgaria in many areas, generating delays in the implementation of some projects. Nonetheless, the Commission would like to stress that since the programming year 2000, the administrative capacity of the Bulgarian and Romanian authorities has improved, although not to the extent desired, and in the framework of the multi-annual programme 2004-2006, specific attention has been given to this issue. In addition, a comprehensive overview of the Phare staff dedicated to the projects by Implementing Agencies has been required and presented to the Joint Monitoring Committees in 2005 and taken into account in the programme 2005. In 2006, a specific statement on administrative capacity has been required with each project fiche.

Third indent - The catalytic effect of Phare money in activities led by international financial institutions has been assessed as far as possible. This also helps to avoid overlap with existing projects financed from sources other than Phare.”

Until the next report.