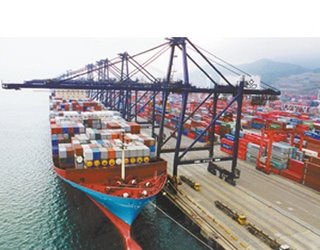 Slagging off the MSM is certainly a favourite sport of bloggers, and one to which we are particularly partial, although taken it excess it can be tedious and counter-productive. After all, as we observed recently, the MSM does have its role and the relationship between blogs and the general media – at its best – is largely synergistic.

That said, one of the particularly irritating characteristics of the MSM is its arrogance in assuming that, because it has just noticed a story, that makes it "news". The usually unspoken (but sometimes articulated) corollary is that mere blogs simply recycle the news supplied by the MSM

Thus is it that The Sunday Telegraph today reports that criminal gangs are "cheating the taxman out of VAT on £1 in every £7 of Britain's trade with Europe".

The full extent of the growth in so-called carousel fraud, says the newspaper is laid bare for the first time in trade figures quietly released by the Office of National Statistics last week. They show that it is almost five times greater than it was a year ago and now involves as much as 14 per cent of all Britain's imports and exports with the EU.

Errrr…. Not exactly. On this blog on 10 August 2005 we reported precisely the figure of £1 billion loss, adding that, "this the first time fraud on this scale has been detected, and, since 1990, VAT fraud is estimated to have cost the Exchequer at least £20bn - another cost attributable to our membership of the EU."

We returned to the issue again on 13 January of this year with a report headed, somewhat presciently, "Head in the sand", remarking how the news of this growing scandal had passed without a ripple in the media.

Nevertheless, The Telegraph does add some new figures, stating that, if the losses continue escalating at the current rate, the figure would rise to more than £4.6 billion - enough to pay off the National Health Service deficit of £1.27 billion three times over.

The piece concludes, however, with a comment from Mike Warburton, a senior tax partner at Grant Thornton, the business advisers, who says: "Government attempts to crackdown on this type of fraud seem to be having no effect whatsoever."

And there the story is left hanging. In a grown-up newspaper, the implications of this stark comment might actually have been the core of the story, pointing up the situation that we had reported in both of our stories, that VAT is so complex and structurally flawed that it is wide open to fraud. Furthermore, no sooner do the authorities attempt to plug one loophole, then another is found.

Thus, the only rational conclusion that one can draw from this situation is that VAT should be abolished, and replaced with a local sales tax or some other measure which is less prone to fraud.

But, of course, VAT is an EU tax and we are not free agents, so there is absolutely nothing we can do about this haemorrhage of money, without addressing the EU issue. And since the government is not prepared to do that, and the Boy King doesn't "do" Europe, this is left unsaid. We are left with a "curiosity" story with no political dimension and no pointers towards a resolution.

Such are the glories of the MSM.