We are all free men (and women) 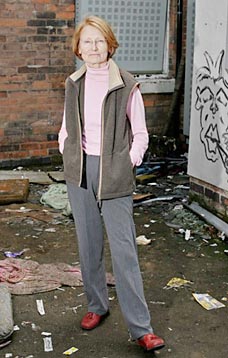 As one who has been led down to the cells in handcuffs for non-payment of Council Tax – mine for refusing to pay the police precept after our house had been burgled four times and my wife’s car broken into, I can totally empathise with Josephine Rooney, the 69-year-old pensioner who was yesterday imprisoned for three months by South Derbyshire Magistrates for refusing to pay hers.

Her story is told in detail in The Daily Mail and elsewhere, noting that, unlike ordinary criminals, who get an automatic fifty percent remission of their sentence, there is no rebate for Council Tax debt and Josephine. Thus, says The Mail,

...at a time when the Government seems to be taking every opportunity to stop sending genuine criminals to jail - and once inside, releasing them as early as possible - she will spend the next three months mixing with drug addicts and murderers after being sent to New Hall prison near Wakefield in West Yorkshire.

Of course, Derby City Council deputy leader, Dave Roberts, like any true state apparatchik, disowns the decision. "The council has no wish to send anyone to jail," he says. "Miss Rooney had ample opportunity to pay her council tax, but she has steadfastly refused. Her sentence is the court's decision, not ours."

But actually, there was no decision. The Magistrates have no discretion in this matter, so the penalty is automatic. To save taxpayers' money on the courts, they would be better of having "go to jail" machines on the lines of "speak your weight machines" in the foyers of police stations, leaving more time for the Magistrates to release the day's crop of burglars and muggers.

But the central point which I addressed when I was last arrested is that this makes a mockery of any idea that we are free men and women. Essentially, you retain your liberty only if you pay your annual license fee to the Town Hall.

For me personally, the situation is even worse. With shared ownership of our house, Mrs EU Referendum’s name also appears on the Council Tax bill. But, the apparatchiks who send out the bills, knowing that I am prepared to make a stand over "services" we pay for but don't receive, have now reversed the order of the names, so that hers appears first. It his her, thus, who receives the summons and if I don’t pay the bill, she goes to jail.

Jail I can stand but the thought of dealing with Mrs EU Referendum after she has been released…? I want to live, so I pay up.

And all this is arranged by the kindly "Customer Services" department of the Council. And that is what really pisses me off, this total perversion of our language, the dishonesty of it all. If I was really a "customer", could my wife be jailed because I did not pay a bill for services I was not receiving? I think not.

And what has this got to do with a blog labelled "EU Referendum"? Well, in truth, not a lot, except that it does demonstrate, once again, that the EU is far from being our only problem. When we have brought down the EU, the local Councils must be next.