Denial is not an option 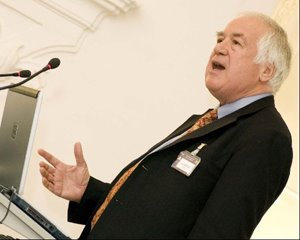 Let no one be under the illusion that our recent focus on the headline issue of the deaths of British soldiers arising from inadequate equipment is simply about what my colleague calls "toys".

The central and substantive issues, which are beginning to emerge from our forum discussion, are the very nature of our armed forces, what they should be doing and how they should be structured and equipped – all in the context the pursuit of our national interest.

From this stems the thesis – which we have explored and will continue to explore in future posts – that we are at a decision point, where we must chose between two divergent foreign policy objectives.

On the one hand, there is the prosecution of the "war on terror" in Iraq and elsewhere - the "long war" as Bush puts it - in alliance with the United States and like-minded nations, within or without a Nato operational framework. On the other, there is the development of the capability to act independently from the United States, under the political umbrella of the European Security and Defence Policy (ESDP), again within or without a Nato operational framework, dedicated to a more traditional – if somewhat ill-defined – "peacekeeping" role.

The problem we have in addressing this choice is that the options are rarely stated clearly and, in terms of the European agenda, often denied. Many thus believe there is no choice to be made and we can continue as we are.

We must thank, therefore, the German MEP, Karl von Wogau who has set out the European defence agenda in a remarkably concise form and, this week, presented it to the European Union parliament Subcommittee on Security and Defence – of which he is chairman.

The report, on the implementation of the European Security Strategy in the context of the ESDP represents, effectively, the near-final shape of a European Union defence policy.

Furthermore, its champion, von Wogau, is no ordinary MEP. He is a respected member of the German political establishment, a senior and active member of the EPP – the political group to which the Conservatives still belong – and an arch "federalist" who is at the leading edge of integrationalist thinking. His agenda very much represents the thinking and ambitions of the hard core supporters of European integration.

Insofar as it is possible to sum up the document briefly, its main sections are contained in paragraphs 29 & 30, which are worth reproducing. Intended as an expression of the view of the EU parliament, it:

29. Considers that the EU is in the process of building a Defence and Security Union covering external security as well as various aspects of internal security and natural disaster management with the following elements:

(a) the commitment of the Member States to be able to:

- deploy 60 000 soldiers within 60 days and sustain them for one year for
peacekeeping and peacemaking operations, and to build up 13 battle groups deployable at short notice;
- develop capabilities for civilian crisis management in the areas of police operations, the rule of law, civilian administration and civil protection;

30. Is of the opinion that the Defence and Security Union should be completed by the inclusion therein of the following elements:

(a) a common system of satellite and airborne intelligence and common telecommunications standards, to be at the disposal of the military, the police and the disaster management services;
(b) the establishment of a common market in the field of defence;
(c) a European budget covering not only the civil but also the military aspects of security;
(d) an EU minister responsible for foreign affairs, assisted by a Deputy in charge of security and defence policy and a Council of Ministers for defence;
(e) a mutual assistance clause;
(f) adequate parliamentary scrutiny by the Parliaments of the Member States and the European Parliament.

That, to all intents and purposes, equips the European Union, in its own name, to act as an autonomous military power, all in the context of threats defined by the European Security Strategy. These include terrorism, the proliferation of weapons of mass destruction, regional conflicts, state failure and organised crime, but also take into account the increasing world-wide competition for sources of energy, as well as natural disasters and the security of the Union's external borders.

To that effect, von Wogau declares that:

…the task of the European Foreign and Security Policy is to protect the citizens of the Union from those threats, defend the justified interests of the Union and promote the objectives of the Charter of the United Nations.

Like it or not, what von Wogau proposes is coming closer to the reality by the day. The European Rapid Reaction Force, the 2010 "Headline Goals", the European Capabilities Action Plan, the planning cell and many of the other components of his "Defence and Security Union" are not theoretical.

For the UK, though, this creates a huge problem. The EU's vision of how to deal with the threats it identifies is so different from the US vision that - in terms of defence structures, resources, equipment and the rest - the two are completely incompatible.

Yet this is precisely what our government is attempting to do and, as we have so many times before remarked, this is Blair's great error. For as long as he fails to recognise the need for the choice to be made, and act accordingly, he will continue to putting the lives of our troops at risk – as we believe is happening in Iraq and could well happen in Afghanistan – while exposing us and our allies to the real possibility of mission failure.

But, with the von Wogau report, at least the issues are out in the open. Now we must respond. Denial is not an option.