Just as the EU has decided to spend another huge amount of money to turn wine into industrial spirit (not quite what the Gospeller had in mind, I suspect), another institution has come with yet another wizard idea for putting more burdens on businesses, in this case purveyors of alcoholic drinks.

The Institute of Alcohol Studies (sadly, I suspect, it is not what it sounds) has produced a report for the Commission, which suggests that alcoholic drinks should have health warnings on them as tobacco products do.

Unlike the famous picture of Alice staring at a bottle that says “Drink me”, the Institute would like it to say, “Drink me but not if you are about to drive, are pregnant or a young man between the ages of 15 and 29”. I wonder why Lewis Carroll or Tenniell did not think of that. 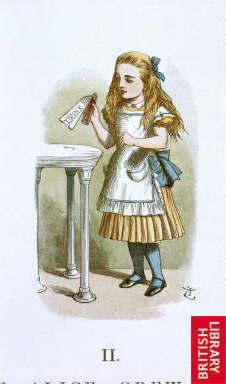 “The report, written by the London-based Institute of Alcohol Studies for the European Union's executive arm, estimated the economic cost of alcohol at 125 billion euros (165 billion dollars) a year.

"Alcohol is responsible for 7.4 percent of all ill-health and premature death in the European Union ... and a cause of over 25 percent of male deaths in the age group 15-29 years," it noted.

Among key recommendations to cut the toll was the inclusion of clear warnings on packaging of alcoholic drinks, for example highlighting the negative impact on driving ability or pregnant women.”

Clearly, the problem is that none of these people know that alcohol may have unhappy effects. Latest medical research, on the other hand, states that some alcohol may well be quite good for you, it being another example of the bleeding obvious that people get large amounts of money to research into. The Bible, what with Jesus changing water into wine and St Paul (hardly the jolliest person in history) advising to “take a little wine for your stomach’s sake” seems to take the same view.

Undoubtedly, the Institute of Alcohol Studies, who is producing reports for the Commission (and who is paying for it, one would like to know) would probably insist on adding health warnings to both those well-known lines in the Good Book.

There are two problems with the recommendation. There is no estimate of how much it would cost to go over to the new labels and how that expense would be distributed; and it is not clear that warnings of that kind actually work.

In fact, it may be reasonable to suppose that people looked at warning labels more carefully in the days there were very few of them and these were completely unambiguous.

“Although there is limited evidence for the impact of warning labels on alcoholic products in reducing the harm done by alcohol, European consumers can benefit from receiving accurate and consistent information on alcohol in order to help them make informed choices.”

It seems a little unlikely that there is anybody in the world who does not have reasonable information about alcohol. What the Institute means is that people should be encouraged to make the “informed” choices they approve of.

Well, I have a couple of other suggestions. Maybe we should stop subsidizing the wine growers of France and Italy only to subsidize them again as they turn their unsellable wine into alcohol. (Then again, that might just be another health drive – you can’t drink the alcohol.)

Perhaps, the various food quangos in this country should stop pumping money into “promoting” English wine. If it is any good, people will buy it. If it is not, tough. Wait for the global warming.

Finally, an issue I do feel quite strongly about. Could the government in its various guises stop subsidizing student bars? Of course, students will drink and will get drunk and will (with a bit of luck) learn how much they can carry. But let them pay market prices. Then they can make “informed” choices on what they want to spend the money they have borrowed on. And while we are on the subject, could the universities stop promoting themselves as nothing much more than drinking institutions? Or is that a realistic assessment of what they are nowadays?